Battle along the Loire River, 534.
Theudebert meets the Bavarians near Giessen, 534.
Childebert confronts a rebel army outside Paris, 544.
Chlothar leads the royal army to suppress a revolt, 544.

Battle along the Loire River, 543 AD
During the summer of 534, Childebert and Chlothar marched south to do battle with the Visigoths near Orleans. The Neustrian army deployed on open ground between the Loire River and a nearby hamlet; the latter was defended by the majority of tribal infantry with all the militia infantry covering the space between hamlet and the Loire River. The Visigoths formed their troops into two divisions; the infantry on the left would clear the village at which time the cavalry of the right division would begin their attack. To the right of the Visigothic cavalry skirmishers would use the marshy area to harass the Neustrian left. 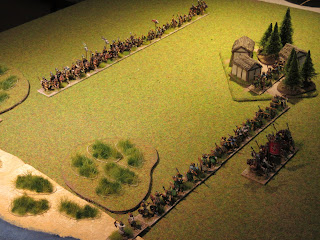 The attack on the village proved successful and quick as neither Frankish king could make an adequate response (low pip scores). In desperation, Childebert counter attacked the Visigothic infantry holding the village by taking troops from the battle line. Both sides were now experiencing heavy casualties leaving undecided the question of who held the village (3 – 3). 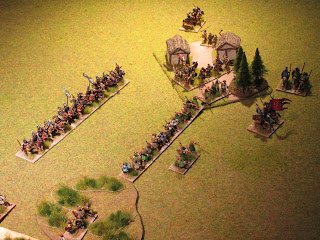 Realising that he could lose this battle, the Visigothic king launched the full weight of his mounted force on the Neustrian line breaking through its centre. The casualties inflicted left Childebert no choice but to call a retreat (3 – 4). 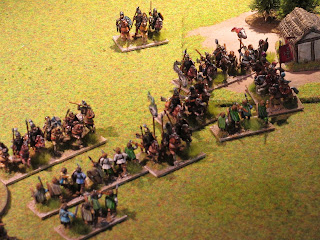 Theudebert meets the Bavarians near Giessen,543 AD
Theudebert rallies the Thuringian nobles and confronts the Bavarians encamped near the village of Giessen. The Bavarians were deployed in deep columns with the intervals filled by smaller groups of tribal infantry. Using the woods to protect his right flank, Theudebert positioned the Ripuarian infantry to face the enemy centre and the Gallo-Roman militia and cavalry extended the left flank. 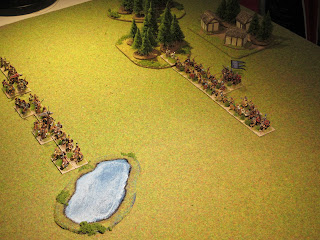 The Franks were eager to avenge their Thuringian cousins and the death of their king and attacked the Bavarians with such fury driving their entire battle line back 120 paces. In that time, Theudebert gained sufficient time to regroup his reserve cavalry to prepare for the expected breakthrough. 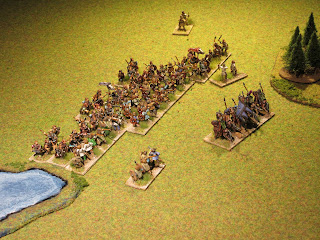 On the left, the loss of a Frankish militia unit was quickly filled by cavalry from the reserve line. These destroyed a Bavarian warband giving the cavalry an opportunity to fall on the exposed flank of a deep column. Its destruction and came quickly and with it the death of the Bavarian king. This final action brought the battle to a close and a victory for Theudebert (4g – 2). 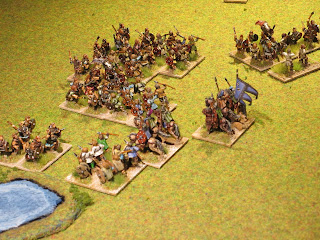 Childebert confronts a rebel army outside Paris, 544 AD
Following the defeats by the Saxons, Breton and the Visigoths a great number of disaffected nobles rebelled against Childebert. Each mustering 3,000 troops the armies met on suitable ground a day’s march outside of Paris. 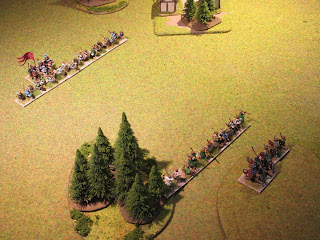 The action was brisk with the militia on both sides holding well against each other. Only the tribal infantry on each side exhibited more vigour for the fight and the Neustrian with greater numbers pushed back the rebel infantry, unfortunately they found themselves beyond their own support. From this exposed position the mounted rebel nobles struck the open flank of the Neustrian warband. The resulting casualties were enough to send Childebert in full retreat back to Paris (2 – 1). 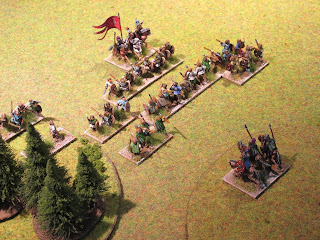 Chlothar leads the royal army to suppress a revolt, 544 AD
News of Childebert’s defeat emboldened the rebellious nobles of Reims to face Chlothar in open battle. This took place near the River Aisne with the royal army, led by Chlothar in person, deployed for battle along the crest of hill. The position was too strong to assault and so the rebels crossed the Aisne to seize the hill flanking the position of the royal army. 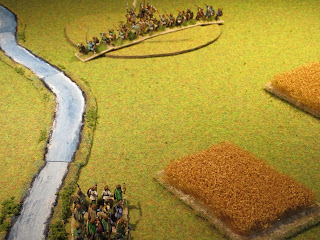 This forced Chlothar to try and head them off lest the rebels redeploy on favourable ground. The next few minutes were spent trying to reach the hill as quickly as possible. The troops of the royal army were hindered by having to change from line to column and attempt the crossing of the Aisne in rapid tempo. Having sent the bulk of its infantry ahead to secure the hill, the rebels were able to reach the hill first. 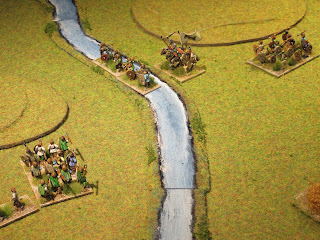 Showing contempt for the rebel troops, Chlothar pushed his troops across leaving half his force on the opposite bank. This presented the rebels with a golden opportunity and quickly launched their battle line to catch the royal troops as they collected on the near bank of the Aisne. Chlothar’s troops were cut down leaving him no further option but to call a retreat and taking flight back to Reims (2 – 0). 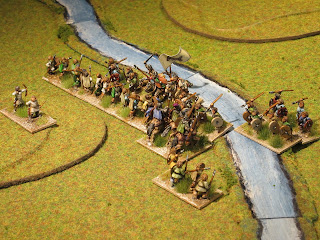 Notes:
The card system worked well to cover the events as they unfolded during a full turn of ten years. Only one card is drawn for each realm as the same card can be used for changing situations, such as moving from a positive to a negative event. Case in point, Childebert (Neustria) had experienced a number of setbacks lowering his standing to a negative level placing Childebert in the unenviable position of confronting dissident nobles within his realm. Naturally when writing about these events they do need time to reach a boiling point; this may require a season or a full year depending on the circumstances. History does provide enough examples to serve as a guideline.

Internal conflicts or civil wars were handled in a simple manner; the armies involved for such conflicts used the standard DBA army list and evenly divided the troop types between the two combatants. Six elements is the smallest any command may be if using the big battle option and this worked well to help speed the flow of the campaign. These small actions often provide greater challenges as the victory conditions are lowered.To date, this now makes nineteen battles fought since the start of the campaign.
Posted by Timurilank at 00:02