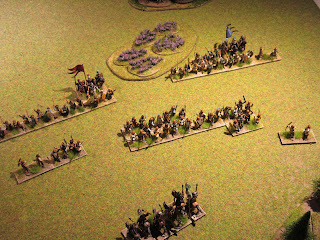 The Burgundi approach place the heaviest concentration of troops in the centre leaving the two kings undecided as to which of the two would be struck first. Noticing a widening gap between the two Frankish groups, the Burgundi struck Childebert first throwing a screen to occupy Theuderic. 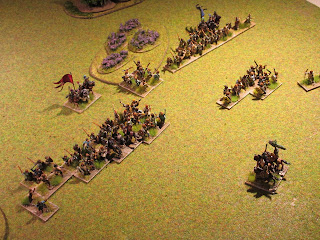 Childebert signalled his brother to hurry his attack as he was taking on casualties, but the attack from the left never came. In 30 minutes (2 bounds) the entire right wing collapsed ending the battle with Childebert in full flight, score 4 – 0 . 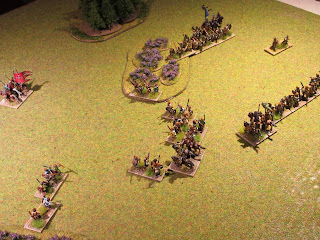 Childebert would never forget the treacherous act played his brother.

The Visigoths invade the Aquitaine 521 AD
Sensing the discord among the brother kings, the Visigoth marched north to retake their lands lost two decades earlier. Reaching as far north as Argentomagus, they confronted the army of Chlodomer formed and ready for battle. 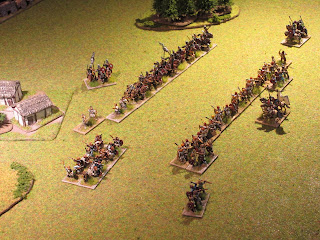 The Visigoths placed all their infantry on their right with all their cavalry stretched across its centre and left wing. The Franks formed a shield wall and slowly advanced toward the Visigoths. The Visigothic cavalry approach was slow so as to give time for their infantry to strike first. In a daring move the Visigothic king moved from his command position to lead the infantry attack cutting the Frankish left to shreds. 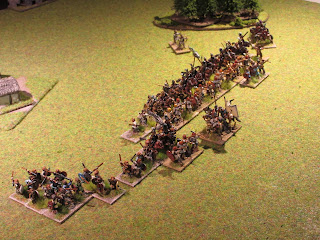 This act set the Visigothic cavalry in motion and charge home. The Franks held their ground well enough, but seeing their left wing collapse they fled leaving the Visigoths the field, score 4 – 0.

Saxon raid on the Frankish coast 522 AD
The Saxons avoided the lands held by Theuderic and now set their sights on those ruled by Chlothar. Moving inland, they encountered Chlothar and his Franks near Bononia. The Franks formed two wings with the militia on the right and the tribal infantry on the left, Chlothar slowly advanced. The Saxon position looked strong as their flanks were protected by woods and difficult hills, but Chlothar set his sight on the Saxon centre as there is where their chieftain would be. 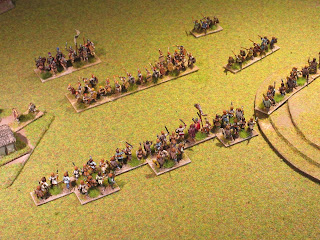 The Saxons had formed deep columns at regular intervals and as the two lines met, these deep columns succeeded in pushing the Franks back on their heels. A breakthrough in the Frankish line caused a panic and Chlothar quickly formed a second line to contain the Saxon breakthrough 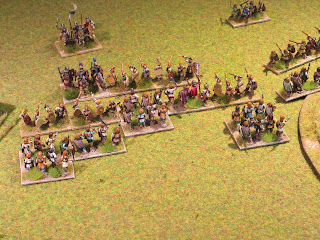 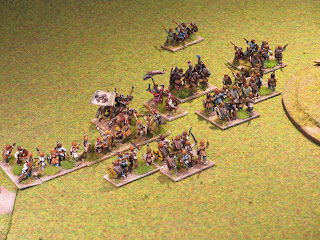 The Thuringi invade Bavaria 524 AD
The Bavarians, at the top of the photo, formed their battle line using the river to secure their left flank. 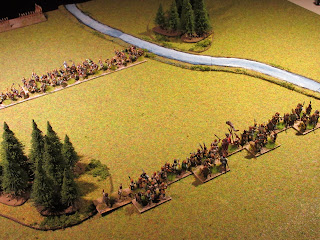 The distance between the river and woods would restrict manoeuvre thus creating a deadly arena. Both armies moved slowly forward with each periodically adjusting their lines. The battle proved long and hard with both leaders fighting in its front ranks. Slowly, the Thuringian line began to erode and a panic swept through their ranks when their chieftain’s standard fell. Demoralised, the Thuringian fled leaving the Bavarian holding the field, score 5g – 1. 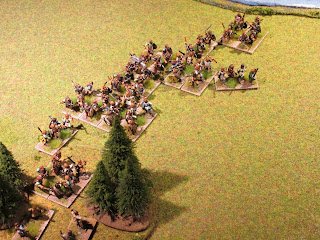