In one of those rare moments between fighting historical games, I wanted to do some painting but found I had no unpainted lead in house. You see, I am at a fortunate point with the hobby that all my collections are painted so this frees me to pursue the fighting of battles, design campaigns, and if needed write variant rules to use with DBA 3.

After the recent sale of a dozen armies, I kept stumbling across a box of Biblical extras from collections which had long ago been sold. I had seriously thought about trashing the lot as these were all painted in a very old style. After taking stock of the figures I had enough to make three Biblical armies. If you are acquainted with Old Glory figures, you are aware many of their figures have weapons held close to their bodies or head. Cutting the weapon free can be done, but this requires a good dose of patience. 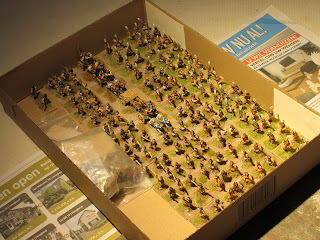 The project took about two weeks to complete, but as you can see from the photos, the extra work was worth it. All javelins and bow are positioned to make them look ‘lively’ and each army is painted with a theme colour as the figures are basically identical.

I/6a Early Bedouin
Their skin tone is bronzed in comparison to the other two. Their kilts are darker compared to the others and I have given them leather headbands. 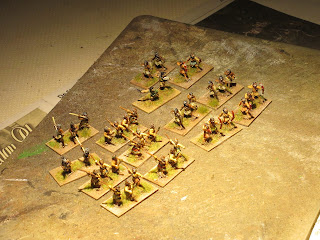 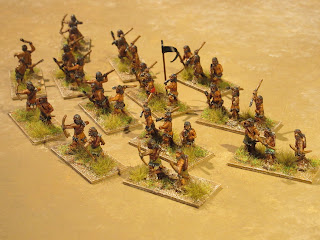 I/7a Early Libyan
Skin tone is a lighter shade than the Bedouin. Cloaks are painted in solid colour with contrasting trim. Feathers are all white with the exception of the chieftain’s element which are red. There are extra bow elements if one wishes to use the option. 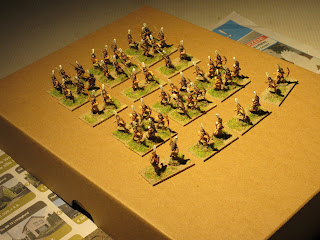 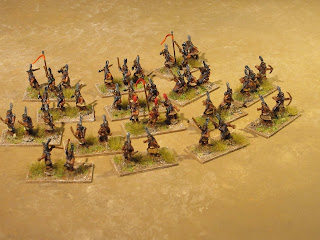 I/15 Later Amorite
These represent a wealthier group of warriors and I have therefore painted them with lighter coloured kilts, the majority of which are bleached. Javelins have been converted to war axes and sickle swords to make five elements of blade. The blue serves as a theme colour appearing on the trim and waist band. The platform car was given extra mules from the Colonial baggage set and the car is constructed from a limber covered with triplex wood. 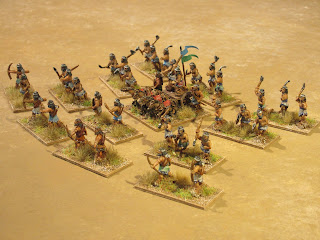 In the two weeks it took to refurbish these I have placed an order for Black Hat Old Kingdom Egyptians which dates the collection to a pre-chariot era. I have given some thought to expanding the collection by adding Nubian and Hyksos, but this idea will be placed on the back burner for the moment.


After painting the Old Kingdom Egyptians, I will construct an appropriate looking hamlet. I found the Assassin's Creed Origins a good source of inspiration.

Cheers,
Posted by Timurilank at 02:06