This had been posted to the Fanaticus Forum in January of this year, but changes in Photobucket policies made viewing the camp and its extension no longer possible. I decided to post this here with new pictures and revise the text describing its construction.

The style of camp is one used during the Consular period or Polybian era. making use of the ubiquitous cocktail stick, string and Milliput.

Cocktail sticks are cut to 15mm (with point) and 5mm lengths. The shorter pieces would function as spacers placed between the longer pieces and due to the embankment will not be visible.

Cut a 10mm strip of standard paper. The length should equal the two sections of wall to be constructed. The strip is scored in the middle (lengthwise) so bending this will form an ‘L’ shaped support.

Alternating lengths of sticks, these are glued with contact cement. Do this in small sections as you will need ensure that sticks are level and upright. With a second ‘L’ shaped support, glue this to seal the lower portion of the wall. After this dries the wall should stand erect.

I use a 3BW x 1BW base for my camps, so the wall should be set back 5mm from the edge to allow for an embankment. Pencil a line on the base to indicate the position of the wall and an opening (15mm – 20mm).

You will need to bend the wall section to form a corner. Cutting a section of paper support (a wedge) with a modelling knife will help. Glue this to the base and allow drying.

Using Milliput, roll this into lengths equal to your wall section. It is best to do this four times (two interior and two exterior sections) as Milliput will lose its tackiness rather quickly.

At this stage, I used an old toothbrush to bring texture to the embankment so sand or grass will adhere better than on a smooth surface. Let this dry overnight and the following day you can add the thread to simulate rope binding the stakes near the top. Spread thin white glue to bind the thread in place and after this dries, the camp can be given an undercoat. 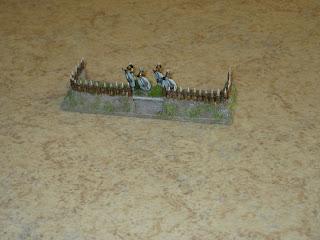 To finish the piece, I covered the embankment and base with a white glue and sand mix. Paint the camp and ground to taste and add sparingly some electrostatic grass to the ground and embankment.

Expanding the camp.
Two such camps were constructed and included a middle section measuring 2BW x 3BW. Together, these create a larger "fort" which measures 4BW x 3BW.

The earth colour is Citadel's Angrellan Earth (Technical) diluted to a 1:5 ratio. Daub the paint on as brushing may loosen the sand. Dry brushing the earth with Citadel Ceramite White (Base) will pick out stones and "dust" the ground surface. 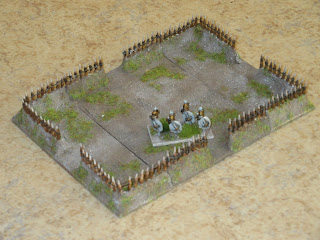 This has become a standard ground colour for all my collections.
Posted by Timurilank at 01:13