I have a number of villages for use with our DBA games in differing architectural styles, but none are truly suited for my Early Germans, Gauls or Iberians. Therefore, between painting projects, I decided to rectify that deficiency and build a small hamlet.

A quick search of Celtic housing did find differences between Iberian, Gallic and structures east of the Rhine. Much of the Celtic buildings found in Northern Spain made use of stone. whereas timber walls would be prevalent east of the Rhine. Rather than building a set of huts for each style, I opted for the general ‘look’ – a circular structure, walls covered in wattle and daub with a roof of thatch.

My plan was to construct six buildings so I could select any of the BUA templates to vary the size of my Celtic hamlet.

Shaping
I used standard pink foam and cut six cubes that would eventually shaped into Celtic huts. Starting with the walls, these are roughly 10mm high and trimmed back to leave a few millimetres of roof protruding beyond the wall. 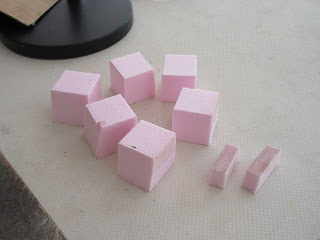 Shaping the roof as a pyramid, round the corners by gradually shaving excess to form a circular cone. Each cube is 40mm high, so you will have some room to experiment with; the completed huts are 30 – 35mm in height. The photo shows an interim step; sharp edges were trimmed further with another blade. 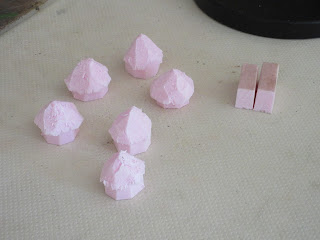 Milliput
The walls are applied first and with a sewing needle (or modeling knife) score a doorway and wooden supports (5x) around the structure. Using an old toothbrush, I gave the walls some texture that will be picked out during painting.

Before covering the roof, I based each of the huts on 1.2mm triplex wood as scoring the thatch would be easier if holding a base between fingers than smearing tacky Milliput over the completed walls. 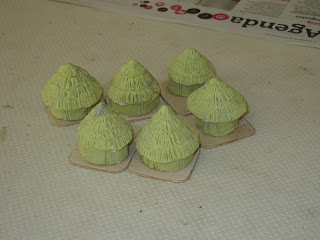 Extras
Some bases were cut larger that others; these would have wattle fencing added around the base.  I used 1mm brass rod for the support and brown string following a similar method used for my vineyard.

The entire structure was given an undercoat of white paint. The hut and fencing were painted next. After drying, the base was covered with a white glue and sand mix. After painting the ground, where necessary, items were highlighted or dry-brushed and finally electrostatic grass was added to complete the base. 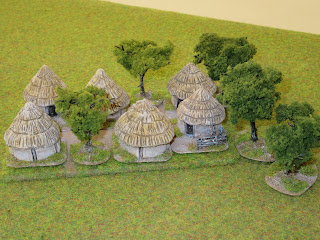