Around 800 AD, anarchy reigned in the outlying province of Ifriqiya (Tunisia) and to restore order, the Abbasid Caliphate sent its army. This brought temporary relief, nonetheless two decades later (824 AD) a weakened Caliphate would soon permanently lose its western territories.

The Early Muslim North African army has similar but smaller composition to the Abbasid; the shortage in number is filled by native Berber light horse and foot skirmishers. Having littoral as home terrain, they do have an option to land troops by sea.

Game 1
The Abbasid met the North Africans along the shores of the Mediterranean Sea. From the coast, the field was relatively flat but inundated with large patches of marsh forcing the Abbasid to deploy in three columns. 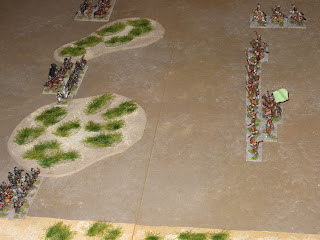 This scrappy affair did not last long but was nonetheless filled with casualties for both sides.
The marsh effectively created three separate battles with the Abbasid holding the advantage with their heavier cavalry. 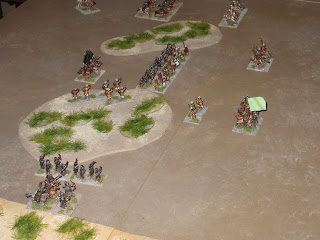 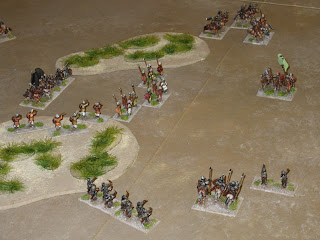 Game 2
The terrain was similar to the first engagement, but the North Africans found themselves facing west. 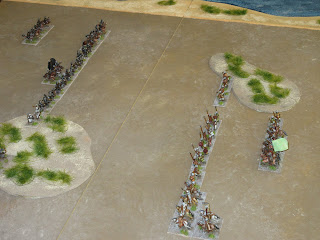 Both sides wheeled their lines so as to meet between the marshland areas. The North African surprised the Abbasid with a rapid encirclement of their right flank. 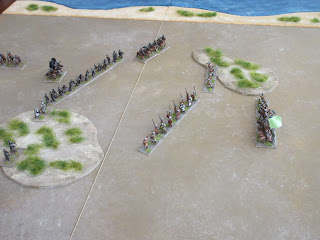 The raid on the Abbasid rear effectively drew the attention of the reserve units that they missed a number of opportunities to support their infantry. In that brief period, the Abbasid spearmen and archers were mauled forcing the Abbasid general to call a retreat. Score 4 – 1 for the Early Muslim North Africa. 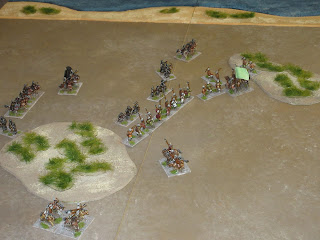 Game 3
As defender in the third battle, the Abbasid secured their left flank along the slope of a difficult hill. The Jund cavalry were deployed in the front with spearmen formed to their right. The Abbasid would place their hope on a quick mounted charge supported by archery fire. 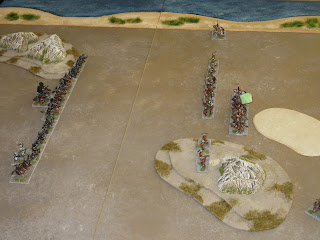 The Nubian line seemed hesitant about moving forward, so the Abbasid quickly changed plan and would attack in right echelon with the cavalry holding a support role. 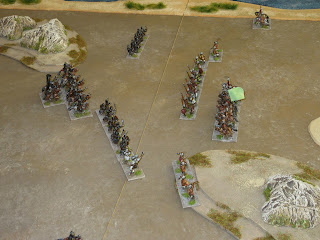 The Abbasid right wing could do little as the forward slope in front was covered by Berber skirmishers and Berber light horse was prancing about to the rear. This left the Abbasid spearmen in a precarious position facing African heavy cavalry and their spearmen bearing down on the Jund cavalry. 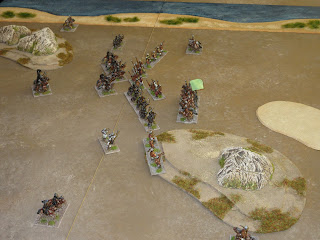 On the left flank, the Abbasid archers were being cut up by more Berber light horse. This effectively brought the battle to a close. Score 4 – 1 for the Early Muslim North Africa. 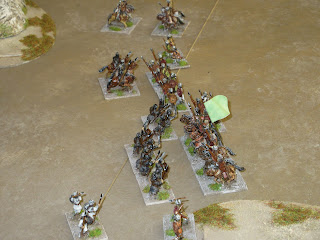