After 750 AD, Nobatia is under Makurian control and later, the Christian Nubian march into Upper Egypt to confront the Abbasid. The composition of the Nubian forces has not changed since the time of the Umayyad. Their archers are still held in high regard as are the infantry, while the mounted troops still retain the camel mounted spear they also have Arab light horse.

Like their banners, the Abbasid are now uniformly clothed in black; this is in sharp contrast to the pristine white of the Nubian army.

Game 1
The Abbasid made use of the rocky ground to secure its infantry line. With the exception of the general’s bodyguard, all the Abbasid mounted formed on the right flank to face the Nubian light horse. The plan was to sweep them aside and engage the Nubian second line while the Abbasid infantry engaged the enemy from their front. 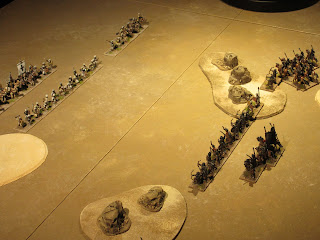 The Nubian left wing kept the Abbasid flank attack in check. Advancing slowly, the Nubian archers were able to lay down an effective barrage of arrows. 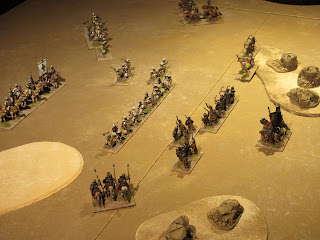 The Abbasid flank attack had been neutralised which gave the Nubian an impetuous to attack the main Abbasid battle line. The camel mounted units added their weight to the effort to gain a victory. Score 4 – 3 for the Christian Nubian. 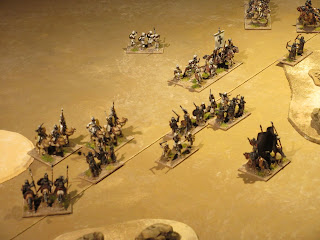 Game 2
The Abbasid deployed their line closer to their camp. This afforded ample space to deploy the spearmen flanked by equal number of Jund cavalry. The archers and the Mutatawwiá volunteers formed up on the slopes of the difficult hill. 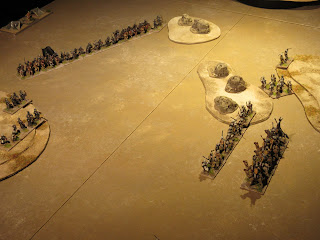 The ground effectively channelled the Nubian advance. The advance by the infantry was stalled as the expected support from the archers had difficulty in crossing the rocky terrain. This delay would cost the Nubians the initiative. 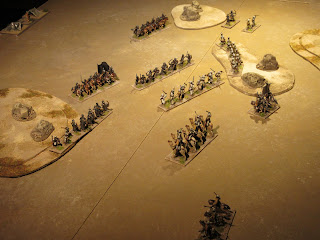 The situation had taken a serious turn as the Abbasid general committed himself and his guard to stem the Nubian assault. 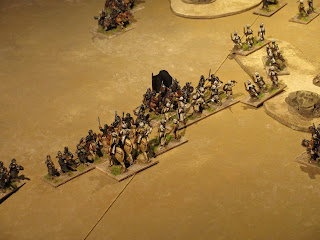 The effort was well timed as up to that moment, the battle was swinging to and fro (3 – 3). The Nubian spearmen were decimated but had lost their camel mounted troops. Seeing the battle lost, the Nubian general called a retreat. Score 4 – 3 for Abbasid. 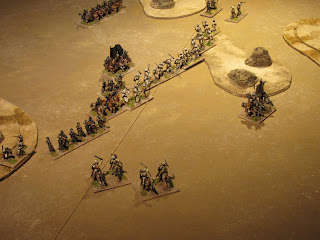 Game 3
The final engagement took place near an oasis which the Abbasid used to secure their right flank. Abbasid infantry formed the first line supported by mounted forming a second line. The Nubian army deployed in an extended line to meet the Abbasid. 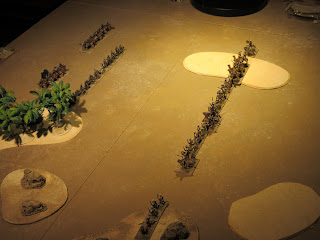 This was a desperate action with both sides meting equal number of casualties. Unfortunate, the Nubian general was unhorsed and carried off the field. Both sides lost equal numbers, but the Abbasid held the field. Score 4g – 3 for Abbasid. 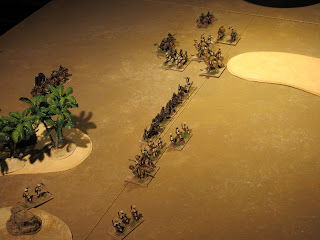