The Byzantine army face east with its left wing resting on the Euphrates River. To secure the army’s flank, General Ascan has placed all his infantry there with all the cavalry under his command to their right. In the centre, Belisarius deploys his cavalry to extend Ascan’s line and to support his heavy cavalry are the Hunnic light horse. Completing the Byzantine deployment, the Lycaonian infantry are positioned furthest to the right adjacent to the Ghassanid allies.

Across the field, Azarethes has deployed his heavy cavalry with light horse archers to face each of the Byzantine commands. Behind each division are reserve cavalry units forming a second line. 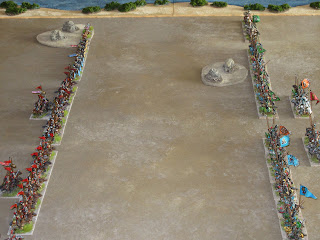 The Ghassanid Arabs are deployed along the rising ground forming the Byzantine army’s right wing. Across the field the Lakhmid Arabs can be seen deployed in equal number. 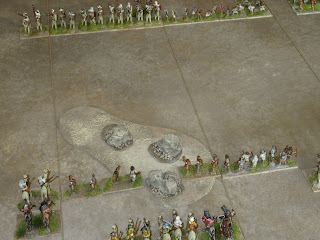 The ground is ideal terrain for cavalry and marked only by small patches of rough ground. As the battle commences, the Arab allies on both sides demonstrate unusual energy and close the distance between them. The rocky ground in front of the Lakhmid position forces them to split their effort; their light troops must first secure the ground leaving their cavalry back in support. In contrast, the Ghassanid are not hindered by the terrain and so move forward on a broad front. 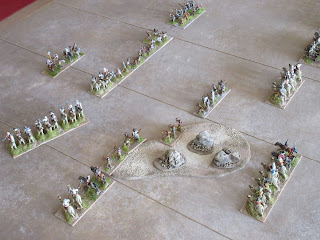 Both opposing centres move cautiously forward placing their initial effort on their flanks closest to the Euphrates River. Ascan has moved his infantry ahead of his cavalry line confident that they will push the light horse away from the river bank.. 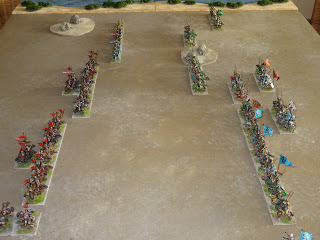 Nearly an hour has passed (turn 3) and the first casualties can be seen dotting the hill slope on both sides of the line. The Lakhmid skirmishers, making good use of the rocky ground could now harass either Ghassanid taking place on either side. 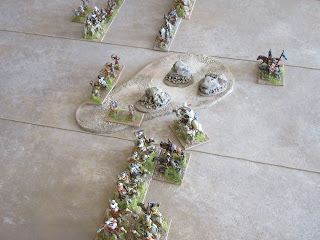 The Byzantine infantry were able to force the horse archers to withdraw so now their efforts would focus on the Asavaran cavalry. At this moment, a unit of skutatoi moved into the rocky area separating two Persian cavalry lines. 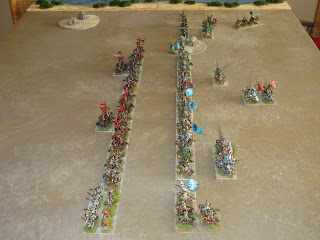 Approaching mid-day (turn 6), the Arab allies on both sides have fought well and inflicted an equal number of casualties (2 – 2), yet neither side could manage to turn the other’s flank and take advantage of the higher ground. Further toward the river, the Byzantine and Sassanid were fully engaged along the entire line with casualties beginning to fall among  each of the four commands. 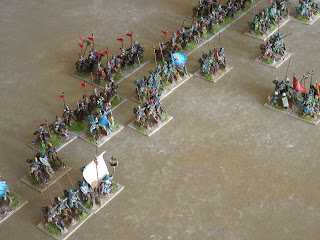 Despite the long period of skirmishing the Byzantine were steadily pushing the Sassanid cavalry back and with Ascan's the infantry turning the Persian right away from the river bank the prospects for a victory looked good.

After hours of skirmishing to and fro, dust clouds had obscured the activity taking place behind the Persian line. Both Azarethes and his subordinate had slowly moved their reserves further south and the vassal horse archers were recalled from the far right flank to join the battle in centre. 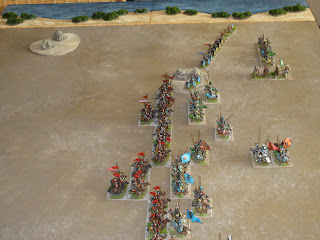 Mid-day had passed (turn 10) and on the hill Ghassanid troops could be seen fleeing along the slope as they had been dealt a deciding blow by the Lakhmid (4 – 2). This did not bode well for Belisarius as both centre commands had reached a tipping point (3 – 3). Calling on his troops to renew their effort Belisarius with his Bucellarii joined the battle. 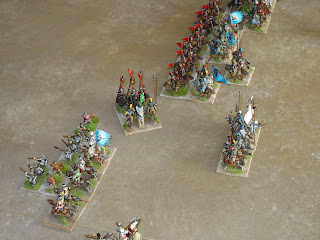 Both army banners could be seen in close proximity of one another, but both commanders were focused with fighting their separate battles. The laughter of the muses could be clearly heard as both centre commands reached demoralisation on the same bound, but it was the timely arrival of the light horse from the right wing that tipped the scales. With the Ghassanid in fleeing the field and his own command broken, Belisarius was forced to order a retreat. 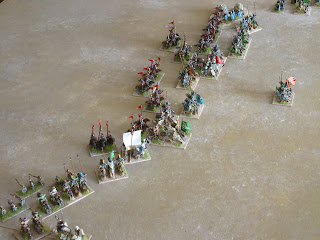 Note:
The battle did flow as history is recorded. In actuality it was a long series of low pip scores that held the Persians back from developing their game plan. Despite the low scores, both Persian reserves slowly moved south toward the anticipated weak link; the area between the cavalry of Belisarius and the Lycaonian infantry. It was here that the Hunnic light horse was destroyed which prompted the recall of the Persian light horse from the right flank. Their rapid relocation tipped the balance to help win the battle.

In retrospect, one-third of the Byzantine army was infantry which limited any use of reserves to the commanders and their immediate guard. This became a critical issue as the Byzantine could not counter the Persian relocation of troops.
Posted by Timurilank at 00:01