The Arab armies had conquered Egypt in 640 AD effectively cutting the Christian Nubian from the Byzantine Empire. Two years later, the Arab armies probed the frontier region of Nubia but that expedition met a disastrous end at the first Battle of Dongola in 642 AD.

Nubian resistance was to be tested a second time at Dongola (652 AD) with the Arab force meeting a similar result. The Umayyad, would continue their expeditions up the Nile to test Nubian strength. Army lists for both forces can be found below.

Game 1
The Nubian army would attempt to clear the rough ground ahead of enemy and pin the Umayyad against the dunes at their rear. 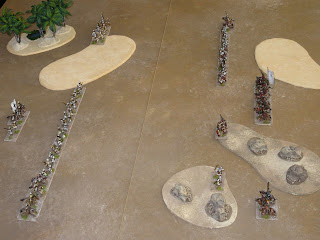 This plan succeeded well, but it was a combination of well aimed archery and poor communication among the Arabs that gained them a victory. Score 4 - 1 for the Christian Nubian.

Game 2
The terrain offered both forces good defensive positions, however it was doubtful if the dunes were a viable option as the Nubian army had camel mounted troops among their number. 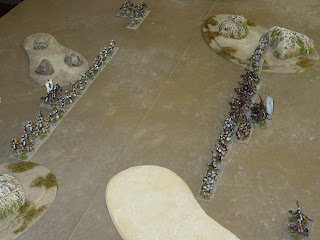 The Umayyad moved forward in left echelon and archers placed on the left flank would hopefully deter the camel troops from entering the dunes. 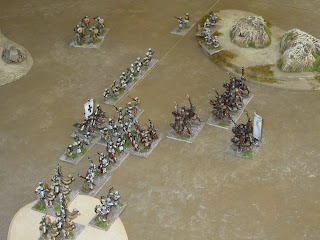 The timely assault by the Umayyad cavalry secured a well earned victory. Score 4 -1 for Umayyad. 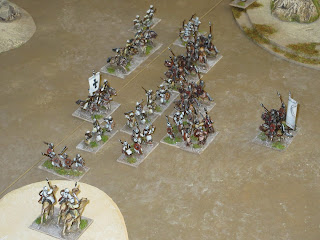 Game 3
The Umayyad made good use of an oasis and rough ground to deploy between. The Jund cavalry formed a second line to serve as a reserve. The Nubian army would try to seize either the rough ground or oasis to turn the Umayyad line. 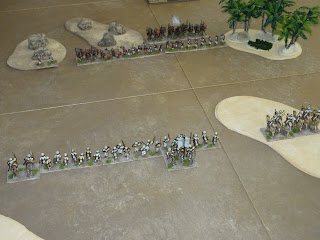 The Nubian army performed a right wheel and would attempt to pin the Umayyad spearmen against the rough ground while Nubian camel troops and light horse moved around the Umayyad left to draw off their reserve cavalry. 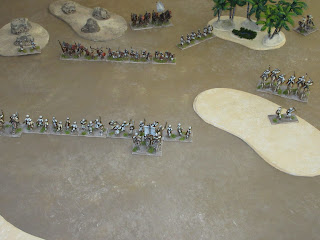 Behind the oasis the mounted troops of both sides clashed as the battle lines of both armies moved forward and closed to combat. The Umayyad had the better of the hand to hand to secure a second victory. Score 4 – 0 for
Umayyad. 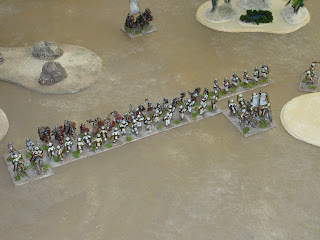