Historical Matches – Umayyad vs. the Nobades

Umayyad forces, having conquered Upper Egypt, moved further south reaching the Nubian kingdoms. Muslim commanders no longer led the infantry heavy armies of the earlier period, but now commanded a balanced army with an equal number of cavalry, infantry and archers. Further change would be needed as its organisation still adhered to old tribal division which were a source of friction for many Muslim commanders. This would be solved when Umayyad armies became a paid military force.

Historically, the campaign against the Nubian kingdoms resulted in very little success. Meeting stiff resistance and finding little wealth to plunder they redirected their attention elsewhere, along the shores of North Africa and further west.

Game 1
The terrain is ‘dry’ and would remain relatively unchanged for the upcoming battles. In many aspects the armies were nearly identical in troop type. 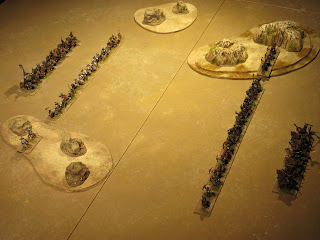 The Umayyad attempted to clear the difficult hill on the Nobades right as preparation for the main assault from the centre. The delay by the Umayyad to attack was an opportunity quickly seized by the Nobades. This resulted in the Umayyad line quickly crumbling leaving the Umayyad reserve cavalry to look on is despair. Score 4 – 0 for the Nobades. 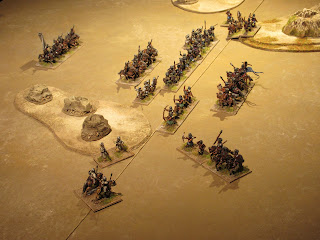 Game 2
Despite an overwhelming victory, the Nobades remained cautious and made good use of the difficult hill to anchor their left. To give their archers ample opportunity to use their weapons, the main Nobades line deployed further back as did the cavalry reserve. 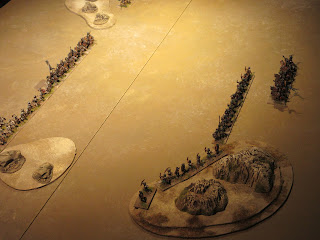 Nobades archers were taken out by their Umayyad counterpart; this left the main battle line with little option but to attack. Unfortunately through mixed signals (low pip score) the cavalry reserve remained behind. 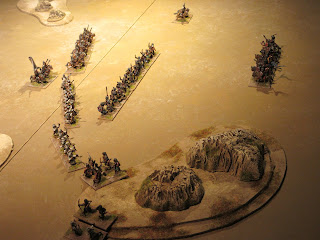 The delay in support cost the Nobades dear as their commander signalled a general retreat. Score 4 – 0 for Umayyad. 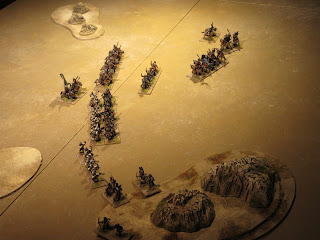 Game 3
As the attacker, the Umayyad was able to catch the Nobades forces in the open. This time, the Umayyad all their cavalry on the left to attack from the Nobades open flank while their infantry closed with the enemy line. 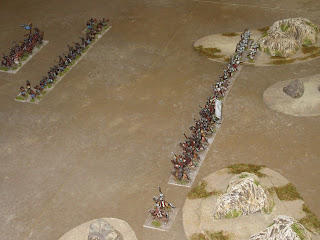 The Umayyad attack was moving as planned. 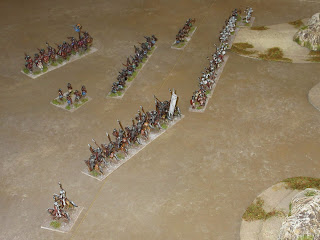 Umayyad cavalry swarmed over an isolated Nobades group. In desperation, the Nobades fought as demons to see the Umayyad commander carried off the field. Umayyad cavalry recoiling from their effort could now see half their strength littered the field. 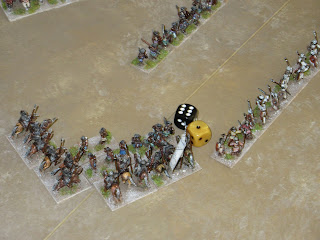 An archer volley despatched another casualty to offer the Umayyad another reason to go home, which they did. Score 4g – 2 for the Nobades. 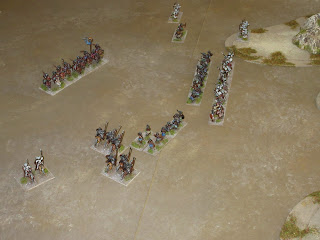