The Tulunid dynasty did not enjoy a long period of rule over Islamic Egypt but did maintain one of the most formidable armies of the time. Its forces were well trained Sudanese, Greek and Turkish troops, however, the cost to maintain such an army placed an economic strain on the emirate and proved its undoing.


The composition of its army is balanced with a good number of mounted troops supported by a quantity of solid blade and bow. To fill out the numbers you have skirmishers or Ghazis (warband) as an option. Like the Aghlabid, the Tulunid also maintained a naval presence in the eastern Mediterranean and can have as 'home terrain', littoral.

The miniatures
The figures are from the Old Glory Arab Conquest series with Essex supplying the Abid Archers. The Ghulams are former Sassanid cavalry which serve well as bow and lance armed cavalry. Most had simple conversions, such as the clipping off of a plume or the reshaping of the helmet by adding a cloth band from Milliput, to make them Tulunid Egyptian.

Painting
This was the most challenging part, what colour to use for their clothing and shields? I wanted them distinct from the other Middle Eastern collections and began first with the ‘regular’ troops, the abid swordsmen. I chose red, orange and umber topcoats and black turbans. The Ghazis (optional) have white clothing and turbans with only the shields adding any colour to the group. Skirmishers have tunics in a mix of colour with a few having white turbans and light colour shields.

Banners
The banners for all four armies were painted at the same time to ensure consistency of shape and size. Ground colour is black for the Abbasid, green for the Muslim North African, and white with cross for the Christian Nubian and for the Tulunid I chose a cream colour. With the exception of a gold disc (Abbasid) and black cross (Nubian) the other banners have no designs or text. From my reading these become common after the 11th/12th century.

The Tulunid Egyptian in battle array 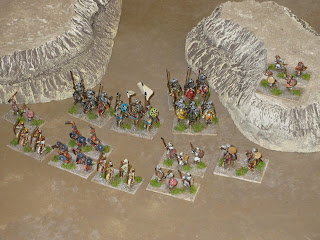 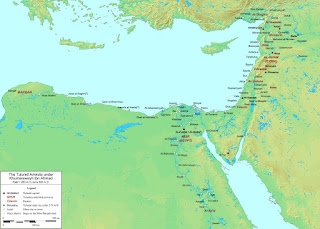