That evening, in the Carthaginian camp, the generals and key officers made plans to resume battle the following morning. The novel tactic of shifting the Numidians from one flank to the other would no longer catch the Romans on the wrong foot, so it was decided to form all the cavalry to the right wing. This would noticeably shorten the main battleline and to compensate for this light infantry were interspersed between the auxiliaries and spearmen. This was a risky deployment, but everyone had to do their part.

As was the custom for consuls taking the field, overall command alternated between the two and for next day the commander of the left flank now made plans. The dense deployment of the previous day would be replaced by a longer line bringing the hastati and principes to face the Carthaginian spearmen. To achieve this, the triarii would take a central position in the main battleline. To take care of an enemy approach on the open side (left flank), a reserve of cavalry and velites would form a second line; these would have the task of neutralising the enemy cavalry operating on that side.

The tension was further heightened when a thunderstorm broke during the night bringing with it a downpour of rain; this would make the fields in the area rough going. This was viewed as a good omen by the soothsayer ensuring the Roman command of victory in the morning.

Battle
Marching out of their camp, Rome deployed its legions to the plan. On the left flank, a second line positioned itself to hold off any cavalry attempting to encircle the Roman battleline. 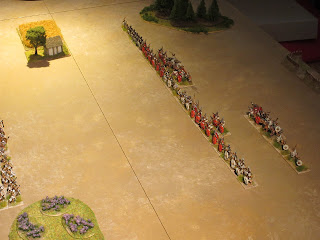 The Carthaginian infantry deployed in the same formation as the day before, Spanish auxiliaries and Gallic warriors in the centre with Poeni and Libyan spearmen anchoring both flanks. On the far right flank all the cavalry formed up eager to come to grips with Roman cavalry. 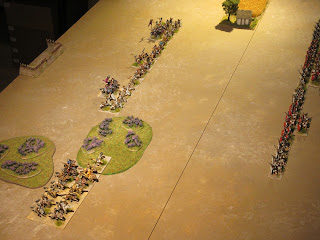 Rome moved first and during the approach both legions were plagued by mixed or missed signals (low pip scores) and as a consequence the approach took on an oblique order. This actually worked in their favour as the Carthaginian cavalry swept quickly around the left flank. 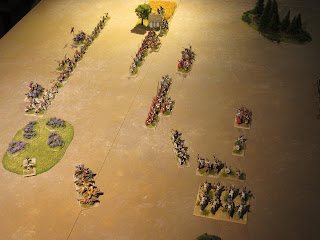 As the Roman infantry were slowing closing on the Carthaginian battleline, the Poeni spearmen were seen retiring; this smelled of treachery. Due to the slow approach on the left, the reserve line with the assistance of Allied auxiliaries was able to blunt the cavalry threat. 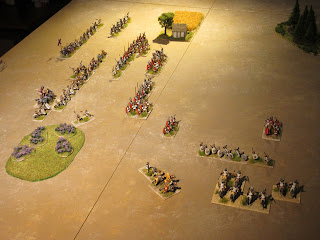 By now, the entire legion on the right was fully engaged and meeting stiff resistance from the Spanish and Gallic troops. Further to the far right, the Allied auxiliaries were making no headway against the Poeni shield wall. 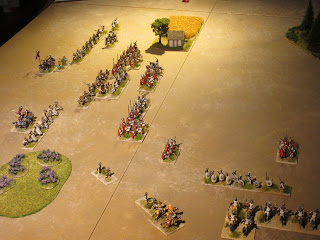 Having made their approach in a staggered formation the hastati and principes were now able to join the battle. These sent the Spanish and Gallic troops recoiling, but the effect brought no casualties; this would seem to be developing into a long hard battle. On the far left, the Carthaginian cavalry were held back with the additional help of a unit of hastati. 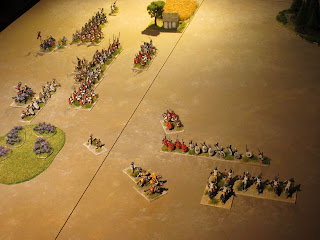 Signal horns were heard and repeated along the Carthaginian line announcing a general assault and both groups of spearmen moved into combat. On hearing the signal, the cavalry renewed their attack. 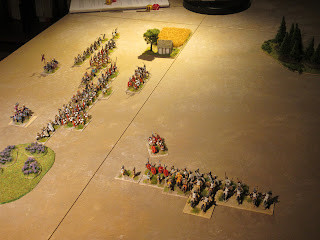 Repeated assaults by the cavalry had cost them dearly bringing their losses just short of demoralisation. It was then decided to have the cavalry fall back and regroup. At this moment cheering could be heard coming from the infantry battle and through the dust could be seen a line of white shields marching forward – the Poeni spearmen. Through the combined effort of the spearmen with the Spanish and Gallic troops, the Roman left wing was shattered leaving the right wing to carry on with the battle. 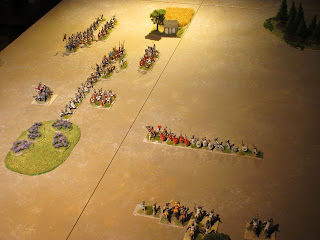 The Roman right was now in a desperate situation as they had suffered significant casualties while the Carthaginian battle line remained unbroken. In a desperate attempt to turn the battle around, the Roman commander and Allied cavalry charged forward. 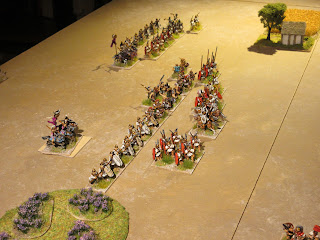 A sense of doom gripped the Roman troops as the left wing could only look on as the Numidian light horse skirted their line to approach the rear of the Roman troops on the right. Unfortunately for the Numidians, they were denied their moment of glory as the Spanish and Gallic troops broke the remaining legion sending them fleeing in the direction of their camp.

The Carthaginian commander, sitting on his camp stool (CP) accepted the accolades from his companions for the decisive victory over Rome. 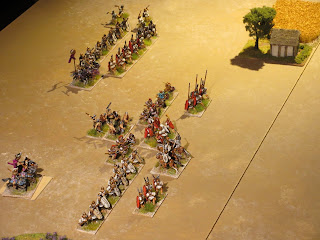 Epilogue
The Carthaginian cavalry had fallen short of their objective, but history of course would present a different story. In effect, the threat did draw off needed Roman troops including the C-in-C that could have proven valuable elsewhere. The C-in-C’s command had suffered three casualties bring his command one short of becoming demoralised; all these came from the cavalry and its supporting light infantry.

The second command, which took the brunt of the Roman assault were able to break one legion and assist breaking a second and all this while suffering no casualties. If the thunderstorm was interpreted as a good omen, then it was obviously meant for the opposition. Needless to say, that soothsayer has made his last divination.
Posted by Timurilank at 00:33