Historically, the Sassanid did deal with a number of Arab tribes that supported Parthia. For this series I selected the Camel mounted troops and not the blade option. There are two elements of blade supported by two of bow and these should be sufficient to hold off cavalry, but camel mounted will destroy knights on a recoil outcome which should keep the Sassanid on their toes.

Game 1
The Sassanid deployment avoided the rough ground and dunes by forming up to the right of these. The difficult hill ahead would certainly be filled with archers so a plan was devised to ‘pull’ the Nomad centre away from their supporting archers. 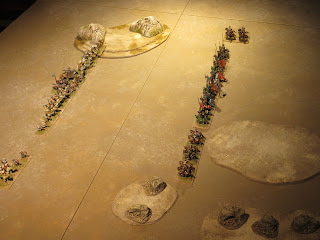 The Nomads had anticipated this and anchored their left flank and wheeled their line to face the Sassanid attack. The Nomads were able to counter the Sassanid effort moving around the hill but were less successful on the right. 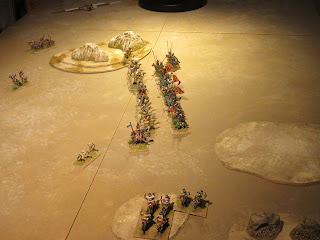 The area between the hill and rough ground became a slaughter house with both commanders joining the battle. Despite the advantage of numbers the Sassanid were able to turn the battle in their favour. Score 2 – 4 for Sassan. 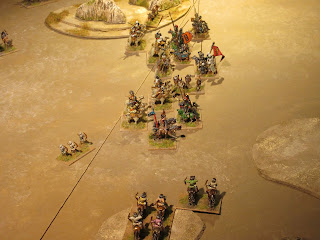 Game 2
For the second battle the Sassanid changed their deployment and formed two groups in place of the usual three as this would bring the light horse in close support of the heavy cavalry. The Nomad adjusted their own deployment by placing all their camel mounted troops on the left while the infantry would make good use of the rocky ground and hill. 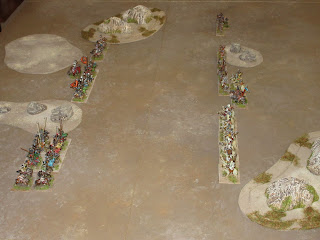 Nomad skirmishers quickly seized a flanking position on the slopes threatening the Sassanid light horse. Nomad light horse moved in support to attack on the following turn. Elsewhere, signals were mixed (low pip score) and the Sassanid advance did not move as planned. 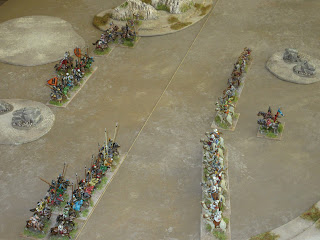 When the Sassanid attack on the right was finally delivered the Nomad infantry had steadily advanced to cut gaps in the left wing with their effective archery. With no means to turn the tide, Ardashir called a general retreat. Score 2 – 4 for Nomad Arabs. 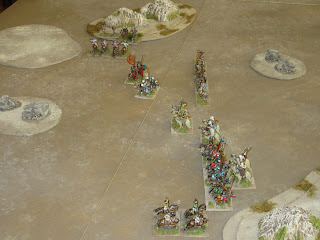 Game 3
In the final battle the Sassanid were fortunate to deny the Nomad use of the favourable terrain. The Nomads did anchor their left on the rough ground, but their right was fully exposed on the open plain. To remedy this, a reserve of light horse and camel scouts formed a second line. 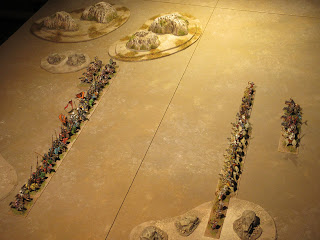 This time the Sassanid effort between wings and centre was better coordinated. On the left, the majority of light horse was able to flank the Nomad position drawing the reserve units away from the main battle. The Asavaran were able to contend with the camel mounted Nomad while the nobles led by Ardashir broke up the Nomad centre. Score 3 – 5 for Sassan. 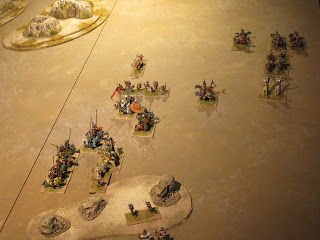