This was a nice pairing taking place on a parched area in northern Italia. The Early Lombard have a strong cavalry force with an option to increase their number, but for the following matches the warband option was used; including the archers (3Bw) the Lombard would make a worrisome opponent for the Early Byzantine.

Game 1
The Byzantine deployment made use of the fields to cover their flanks; unfortunately the wood proved an inconvenience and so the skutatoi and psiloi were formed up on the slopes of the difficult hill giving the battle lines a half moon shape.

The Lombard formed up in an extended line with all their cavalry on the left wing and all the infantry on the right wing. 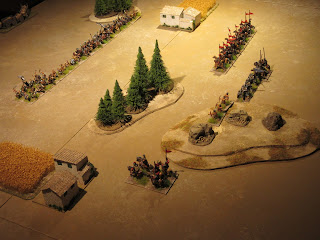 The Lombard cavalry remained in position giving the infantry the opportunity to seize the wood. From that position they could cover the planned cavalry attack. 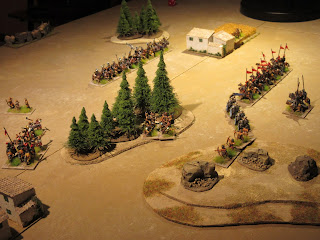 The Byzantine cavalry column on the left found them embroiled in a fight with Lombard warriors and archers. This proved unfortunate as the Lombard got the better of the exchange. This unsettled the Byzantine Strategos as when the Lombard cavalry struck the Byzantine line collapsed. Score 5 – 3 Early Lombard. 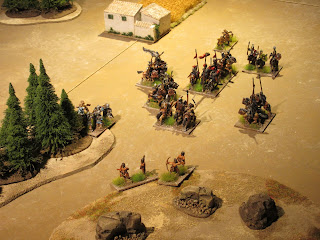 Game 2
This time the fields were exchanged for a small hamlet which served as a focal point for the infantry of both sides. 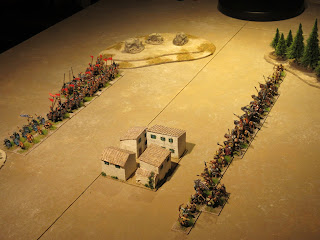 Leaving the Herul as a reserve, the entire Byzantine line struck in unison. The effort became effective as the Byzantine sent a number of Lombard recoiling back. On the right, the Lombard warriors were inconvenienced by the hamlet that their deep columns proved ineffectual. 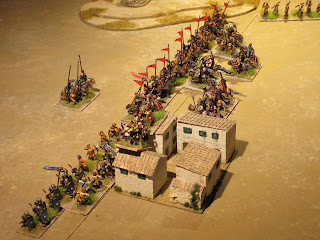 Capitalising on the moment (poor pip score for the Lombard) the Byzantine put an end to key units that the Lombard called a general retreat giving the Byzantine a clear victory. Score 4- 1 Early Byzantine. 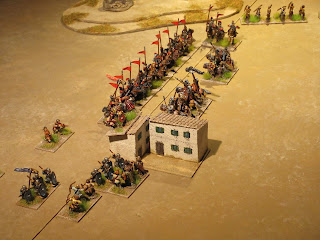 Game 3
This time the Byzantine used the hamlet to anchor her right wing and the left comprised of all the mounted units. Opposite, the Lombard took advantage of the wood and hill to cover their flanks; deployed further back were the Lombard warriors on the left and nobles on the right. 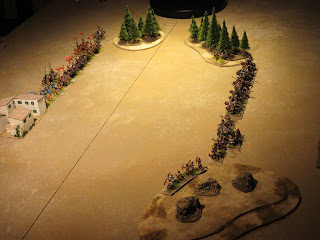 The Lombard moved forward with her left leading in echelon at which the Byzantine responded with a right wheel on the entire battle line. Taking advantage of the slow move forward, the Hunnic light horse made a quick dash toward the Lombard camp. 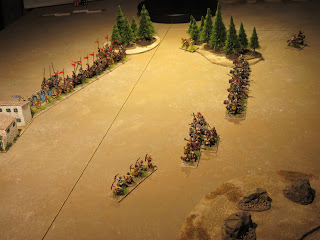 The attempt on the camp forced the Lombard to detach cavalry to deal with the threat. The rest of the Lombard line was now adjusting their lines to conform to the approaching Byzantine cavalry and infantry. 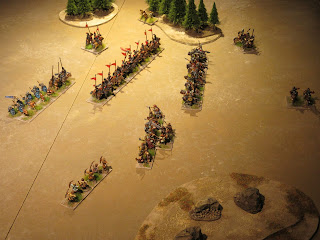 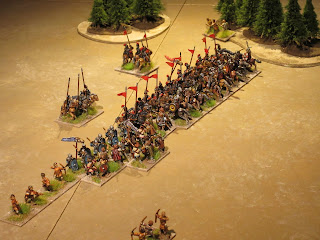 The battle settles into a slugging match with the Byzantine cavalry overlapping the Lombard in several locations. The skutatoi have managed to best the Lombard warriors and together with the losses among the mounted nobles and their camp sacked, the Lombard break and retreat from the field. Score 4 + camp – 2 early Byzantine. 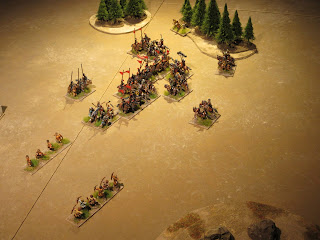