The African Vandals have a Littoral homeland which affords them the advantage of landing troops to flank an opponent. In addition the Vandals have an abundance of noble cavalry (3Kn) and one light horse; not exactly an army which requires much finesse. This should prove an interesting match up.

Game 1
The Vandals decided to deny the Byzantine the advantage of any terrain and deployed amongst the difficult hills and woods bordering the shoreline. As expected the Vandals landed three elements including the light horse to flank the Byzantines. 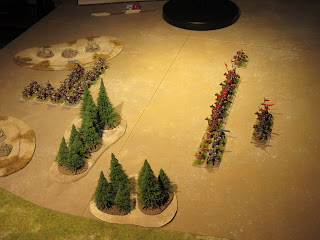 Exiting the defile, the Vandals quickly expanded their line while the landing force approached the Byzantine reserves. Low pip scores bedevilled the Byzantine for the first three turns. 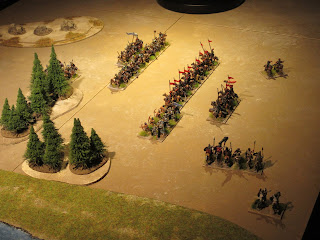 The Vandals struck first and sent all the Byzantine cavalry recoiling ending the turn with an even 1 -1 score. 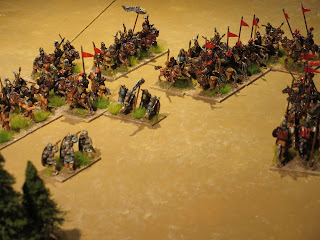 Afterwards, it seemed the Vandals could do no wrong and began shredding the Byzantine formations. Final score 5 – 1 for the African Vandals.

Game 2
This time the Byzantine defended anchoring their right against a difficult hill and wood on the opposite flank. The difficult hill covered the flank well enough to permit any landing by the Vandals to be done in front of the deployment area. 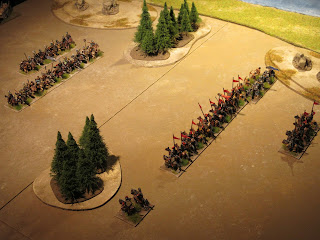 The Vandal landing came as no surprise, but the speed at which the main Vandal force attack did catch the Byzantine flat-footed. At this juncture, the score reached 3 – 2 in the Vandal favour. 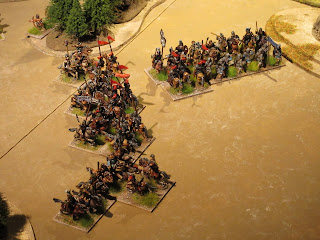 Game 3
The Vandals feeling generous gave the Byzantine the joy of deploying amongst two difficult hills and two woods. This forced the Byzantine Strategos to cover the extreme flanks with cavalry leaving the main body to form up on the difficult hill and in the narrow defile.

The Vandals formed all their troops opposite foregoing the use of a landing. 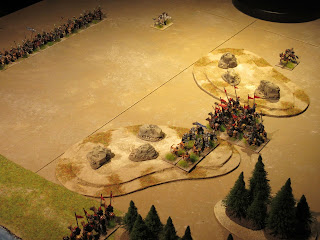 Struggling through bad going, the skutatoi and psiloi lined the slopes with the main cavalry moving forward. The Vandals decided to hold off any forward thrust and work on the Byzantine flanks as the command radius of the Strategos would be constricted. 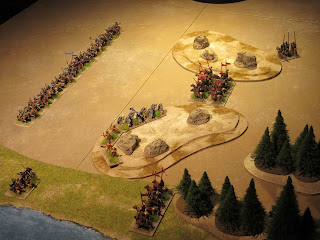 A series of good pip scores allowed the Byzantine to withdraw their main body deeper in the defile and move some reserve units to the flanks. This manoeuvre eventually gave the Byzantine a needed advantage over the Vandals. 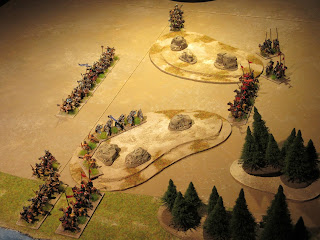 Both Vandal flanking formations were essentially beaten off bringing the Byzantine a much needed victory, score 4 – 1 Early Byzantine. 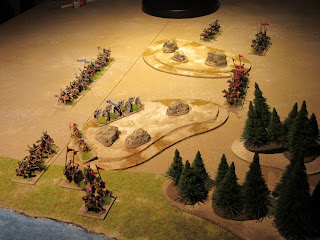 
The African Vandals dealt the Byzantine a good thumping in the first two games and a third match was needed to force the Byzantine to do what they do best – defend. This was not the first time that Byzantine cavalry have advanced forward only to retreat on the following turn. All that is required is patience and await the proper moment to attack (and good pip scores).
Posted by Timurilank at 00:54