For all their light horse and infantry lacking armour, the later Moorish proved a tenacious opponent.

Game 1
As the attacker, the Byzantine were able to deny the Africans any advantage of terrain and caught their army on the open plain. All the Byzantine infantry formed on the left taking advantage of the wooded hill and the cavalry deployed in line covering the distance between two hills. A small column was set with the task to encircle the Moorish open left flank. 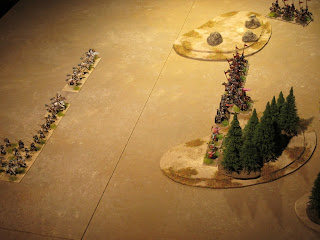 The Moors launched their own surprise by moving quickly to seize the tip of the wooded hill severing the link between the psiloi and the legion. On the extreme right a small Moorish column brought havoc to the rear of the Byzantine force. 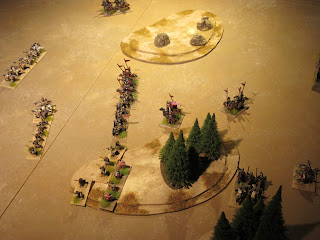 The situation settled down as the Moorish threats were taken out one by one. The flanking column ensured victory and brought a close to the battle. Score 4 – 1, E. Byzantine.

Game 2
The second game offered the Moors a better opportunity to deploy. Set well forward, the infantry took cover among the wood and hills allowing the cavalry to deploy further back. The narrow opening between the two features would hopefully negate the Byzantine advantage of numbers. 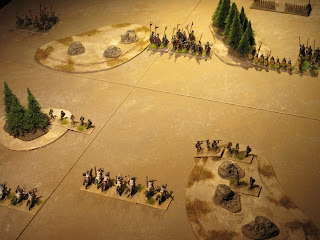 Prepared for a flanking attack, the Moorish cavalry countered this and stalled the Byzantine effort to seize the hill. 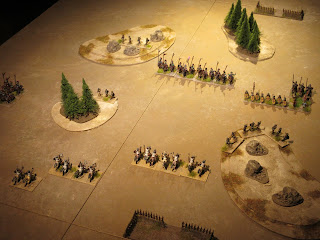 In the ensuing cavalry clash, the Byzantine Strategos heavily wounded was escorted off the field. This brought both sides to one point from victory, but the East Romans were without a leader. Incensed by the loss of their commander and with a health pip score of ‘six’ the Byzantine were able to secure a victory. Score 4 – 3g,  E. Byzantine.

Game 3
The final game saw all the terrain features placed in two quadrants leaving both cavalry forces an open field to manoeuvre in. 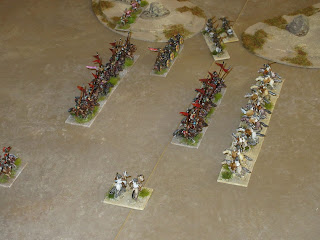 The ploy worked and the Byzantine cavalry fell back to a new position while extending their line. The Moors in turn were forced to follow their charge through. 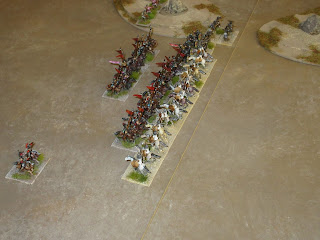 The battle lasted another 30 minutes (2 turns) with the Byzantine cavalry winning the day. Score 4 – 3, E. Byzantine. 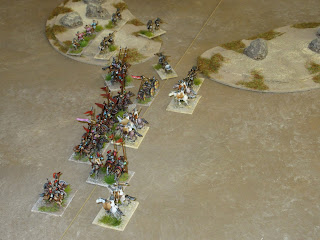