In January of 407, the barbarian horde had crossed the Rhine sending Roman-Gaul into a panic. This not only included the armies of the Vandal, Alan and Suevi but the civilians of each nation. Following the campaign rules, further movement would have to be generated from building activity points during each player’s turn. Both sides focused on the task ahead for the months of January and February. 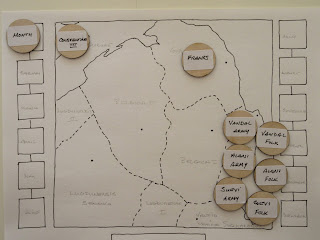 Anxious to contain the invasion, the Franks seized the opportunity to launch an attack against the Vandals still occupying Germania I. The two armies, with nearly identical composition [1], met near the foothills of the Vosges Mountains. Holding the advantage of terrain, the Franks attacked the heavy Vandal columns. The battle was brief with the Franks drawing off leaving the Vandals to hold the battlefield.

In March, leaving their civilians behind in Germania I, the vanguard of each barbarian horde moved deeper into Roman territory to plunder Belgica I. In that same month, Constantine III and the army of Britannia landed in northern Gallia. 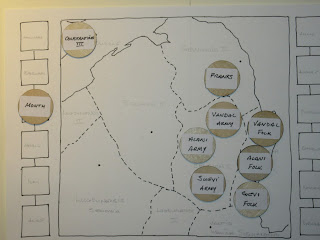 Constantine III having declared himself emperor spent the summer securing his position in Gaul by building his resources (points) and coordinating plans with the Franks to attack the barbarians. The brief respite brought gains for Constantine III and by the end of the summer he would be ready to march. Leaders among the barbarians were experiencing difficulties in coordinating priorities and they too could feel an attack was imminent.

That attack came in August with the Franks launching their second attack on the Vandals. Aided by a contingent of Roman troops [2], the Franks caught the Vandals off balance. The Vandal army acquitted themselves well and forced the Romano-Franks off the field, but at a heavy cost to themselves (4 – 3).

September saw the invaders moving their family and their belongings to Belgica I leaving Germania I a barren wasteland. Constantine III, unperturbed by the Frankish defeat, caught the same Vandal horde in the Loire valley and with superior numbers, including a contingent of Franks; the Romano-Franks handily beat the barbarians. This was the first defeat for the Vandals, but a major setback as it reduced the overall effectiveness of its army to half strength. 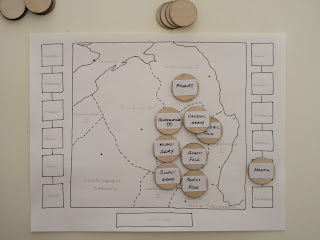 The months of October and November, Roman troops harried the barbarian foragers placing them in critical supply (no activity points were won [3]).

December, winter quarters for the Roman and Frankish armies.

[1] The Vandal commander’s element was the only mounted unit for the battle.
[2]  Roman and Frankish commands could supply each other with a contingent of three elements.
[3]  The only activity points won by the barbarian player were used to move all his counters to the adjacent province, therefore replacing battle casualties was not possible.

Assessment
The barbarian player having brought all of his counters out of Germania I and relocating them further west secured him a technical win. The Vandals have been seriously weakened leaving a good many tribal leaders demanding a new king.

The Roman player took advantage of the summer period to build a good reserve of activity points and these will be carried over to the next scenario. Focusing on one of the barbarian horde and not all three was smart. Next year Honorius would certainly send Stilicho with an army and Constantine III would need a veteran force for that fight.
Posted by Timurilank at 04:04