From Migration to Kingdom – the campaign

During the past months, readers of the blog have noted a number of test campaigns based on the nomadic steppe types invading the Roman or Sassanid empire. “Migration to Kingdom” steps away from the usual military campaign as it is based on the barbarian crossing of the Rhine in 406 AD and ends with them reaching Hispania. Selecting this event as theme for a campaign posed a number of problems with regard to available information, yet such a campaign would offer much play potential.

Let me preface this by stating briefly the situation. At the turn of the 5th century AD, both halves of the Roman Empire were odds with one another as how best to handle the Gothic situation in Illyria and Thrace. This was quickly followed by a number of Germanic invasions of Raetia and the Pannonian provinces; both critical situations which had drawn off the Gallic field army to combat the incursions. The situation was further exacerbated by Saxon invasions of Britannia from across the channel coupled with the Picts and other tribes invading from the north and all combined to leave Gaul ripe for an invasion from across the Rhine. 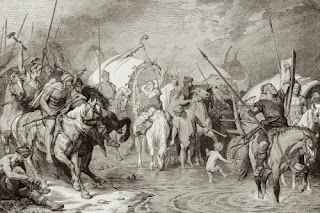 The Barbarians
The migrating horde, formed primarily of Vandals (Asding and Siling), Alans and Suevi which included a number of Germanic tribes numbered a conservative 100,000 to half a million. To describe the invasion as coordinated is an overestimation as they were capable of fighting amongst themselves as against Rome resulting with the smaller tribes breaking away to seek a safe haven elsewhere. It is documented that concentrations of Alan settled around Paris and southern Gaul and likewise, the Burgundi found new lands in the southern regions.

The end date for the migration is generally recorded as the fall of 409 AD and knowing this I decided to design the campaign as three separate scenarios, one for each year. This campaign most likely would not be completed in one evening, but certainly within three. Then with each scenario defined by set parameters and objectives this offered players the advantage of rotating as a Roman or barbarian player.

Rome
In designing the scenarios I did not want to place too enormous a burden for the Roman player, but historically this was a tumultuous period for Rome. Stilicho had beaten the Vandals of Radagaisus and before his plans to free Illyricum from the Goths of Alaric, Gildo, a Roman general, led a revolt in Africa threatening the grain supply for Rome. And at the end of 406 AD one of the largest migrations of barbarians took place.

It may seem that the Roman player would be dealt a bad hand there are a number of factors that play in his favour; the Franks and the arrival of Constantine III from Britannia with an army.


In the coming weeks I will be testing each of the scenarios and included will be some form of internal rivalries among the barbarian tribes which may produce battles smaller than the usual twelve elements per side.
Posted by Timurilank at 03:26