Upon the death of Yazdegerd II (457 AD), the younger son Hormizd betrayed his elder brother Peroz and seized the throne. Seeking help from the Hephthalite Huns, Peroz in a brief campaign captured Hormizd and returned to Ctesiphon to claim his rightful position as emperor. Taking advantage of Peroz’s absence, the Huns claimed the capital city of the Bactrian satrapy as payment. His first step as emperor would be to rid his territory of the Huns who had helped him.

The first engagement takes place outside Balkh (Badriana) and King Peroz must drive the Huns back across the frontier in one brief campaign season to avert unrest in Ctesiphon.

{1} The Hunnic list II/80c represents the Hephthalites Huns for the period 356 – 570 AD. The lists of enemies however do not include the Sassanid of Peroz which is either an omission nor does the Kushan II/46b serve as vassals of Sassan? The Kushan fall outside the first war against the Hephthalites Huns, therefore the II/80d list is used to bridge the discrepancy. 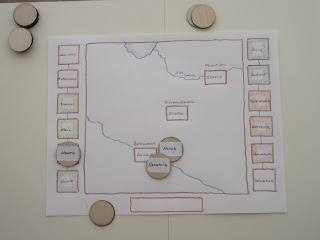 459 AD, spring
Gathering an army and supplies required more time than was wished for but by May, King Peroz was ready to do battle with the Huns. Crossing the Amy Darya River, the Royal army met the Hun between the fertile fields and rolling hills outside the city of Badriana. Peroz placed his faith upon the prowess of the Asavaran cavalry and positioned them forward of his two flanking divisions. 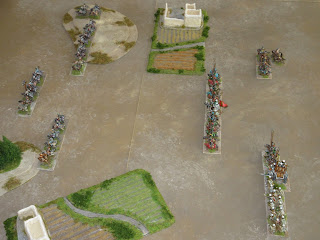 Moving with surprising speed, the Huns engulfed the Persian spearhead, crippling them and sending a badly injured King Peroz off the field. Score 4 – 3 for the Hun. 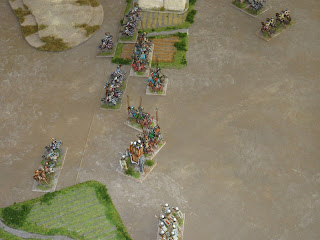 459 AD, summer
The following month, two events raised the spirits of the Royal army; the recovery of King Peroz and the arrival of armoured cavalry from Kush. By June, the army marched off to again meet the Hun. 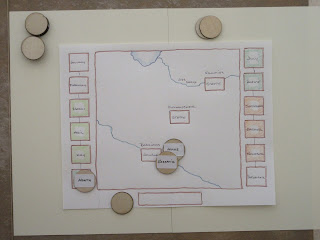 Forming on the left, the Kushan allies and the Persian cataphract would serve as an anchor to allow the Asavaran cavalry to sweep the Huns positioned on the hill and in the valley below. 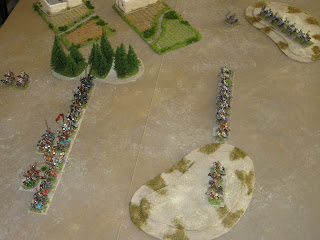 To the surprise of the King, the Huns withdrew their cavalry luring the Sassanid deeper into the valley; an obvious trap as the King could now see to the left the Hunnic division lining the hill crest. 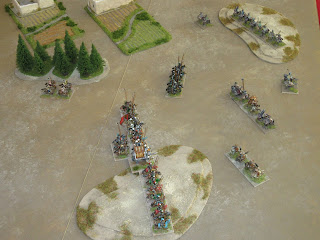 Catching the Hun off balance, Peroz launched a general attack with the elephant corps sending Hunnic horse archers tumbling back giving the King and his bodyguard first kill. 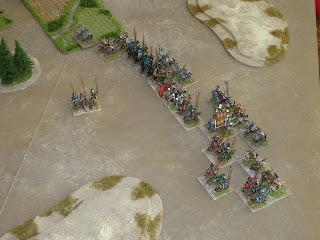 The destruction continued for another quarter hour sending the Huns off the battlefield. Score 0 – 4 for Sassan.

Pursuing the Huns, the armies engaged again on the open steppes near Kushanshahr. The battlefield offered no significant features other than gentle hills and rocky ground so both armies place their main strength in their main division. 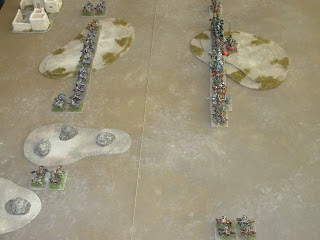 The Huns threw their left division in wide encircling manoeuvre while their main force moved slowly forward. Elsewhere, the Huns caught the Sassanid off balance by destroying the cataphract, holding the left flank of the main division, to follow up their success by turning the elephant corps sending the Asavaran cavalry nearby into a sudden fright. 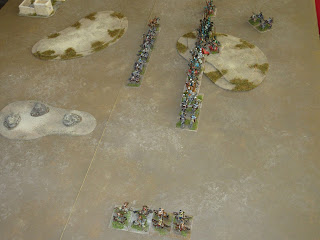 Recovering from their near disaster, the Asavaran cavalry cleaved their way through the Hunnic main division with the Kushan allies adding their success to the tally; this brief but hard fought battle sent the Huns scurrying to the frontier. Score 3 – 4 for Sassan. 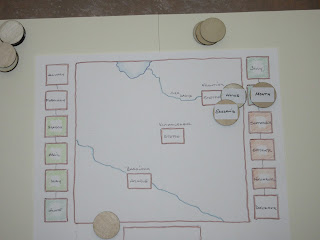 459 AD, August
From a battlefield not dissimilar to the previous engagement the silver thread in the distance was the Syr Darya River marking the frontier and hopefully the final battle. Both sides deployed in extended lines as before with the Huns adding more weight to their left flank facing the Kushan allies and a small detachment of horse archers securing the opposite flank. 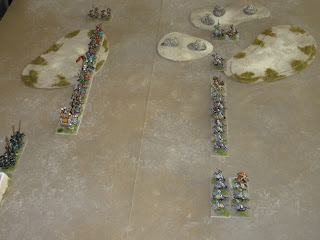 Eager to seek revenge the Hunnic right launched a premature attack quickly becoming embroiled in a dangerous situation as Peroz sent reinforcements. The Hunnic left wing finding no opening in the Sassanid line now found themselves facing the Kushan contingent. The Sassanid main division wheeling to the right forcing the Hunnic ling to follow suit both lines met in a clash. The Huns were not able to sustain the fury of the Sassanid and their Kushan allies and in a brief engagement the shattered remnants of the Hunnic host limped across the frontier.
Score 2 – 5 for Sassan. 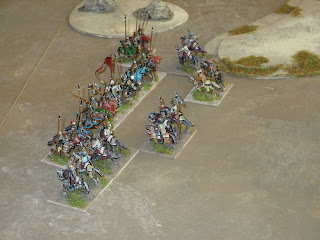 Epilogue
Praising his troops and profusely thanking the Kushan for their support King Peroz returned quickly to Ctesiphon to ensure his throne was secure. Despite the minor setback in the spring, Peroz was pleased with how the campaign in Bactria developed; reinforcements arrived on time and the troops were adequately supplied.

Note; both were able to secure adequate points through the card system to allow movement and reinforcements. Despite the battles lost, the Hunnic warlord carried enough booty away to earn him the sobriquet “the unlucky but wealthy”.
Posted by Timurilank at 01:48