The Roman army confronted the Seleucid in Greece and later in Asia Minor at the famous battle of Magnesia 190 BC and collecting them would bring a nice departure from the variety of barbarian armies I already have.

Looking at the army list (II/19c and d) the Seleucid main component were the phalanx and cataphract cavalry. Add elephants, scythed chariots and a host of auxiliary and skirmishing troops and you have on paper what looks like a formidable army. As you can see from the photo the collection is three commands strong and not pictured are 18 elements of Galatian, archers and slingers all ready for battle.

I am using two sources to organize and paint these:
Duncan Head – Armies of the Macedonia and Punic Wars.
B. Bar-Kochva – The Seleucid Army – organization and tactics in the great campaigns.

Painting.
Reading Bar-Kochva’s book I decided to have each army as represent one of three divisions, the Royal Guard, the Guard and the troops of the line (katoikoi). 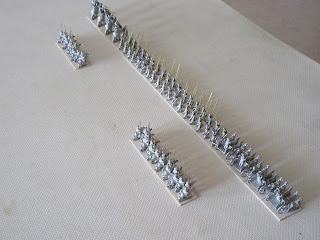 I do not intend to detail the organization of each, but will merely state each would have their own colour theme.

The Royal Guard would include the cavalry units Royal ile and Agema and the infantry, the Argyraspides (silver shields).

The Guard came from the Greek and Macedonian settlements and for these I am using bronze for their theme colour.

The katoikoi or troops of the line were recruited from non Greek and Macedonian settlements and I am giving these bronze shields but with a different colour trim. The thorakites (4Ax) would ideally pass for imitation legionnaires and all six elements will have white shields but with differing trim. 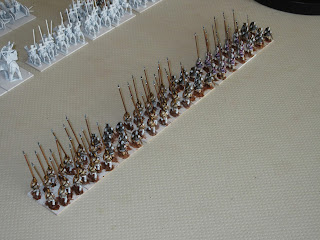 Eighteen elements are done and will be varnished later this evening, but now I can make a start with the mounted figures; cataphract, scythed chariot and elephants.
Posted by Timurilank at 03:30