Home terrain for the Lusitanian is hilly, so we will see some seldom seen terrain combinations such as difficult hills and river. During the Hispanic campaign game posted earlier, Rome has never fought the Lusitanian with an even number of elements, so this will be an opportunity to demonstrate their true worth.

Test game one
Lusitania deployed her melee infantry in centre with the bulk of her skirmishers in the wood on the left and the remainder on the high ground on the right. Further to the left were the light horse that would encircle the Roman position and strike their rear when the opportunity arose.

Rome placed a third of her force on the right bank of the river while the main army would make their crossing facing the Lusitanian main line. 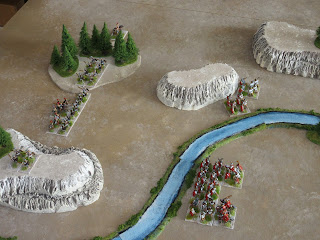 Lusitania moving first quick timed to seize the heights ahead of the Romans and move the bulk of her forces toward the river bank. Rome, discovering the passage would be difficult (die roll of six) muddled her way forward; auxilia would now contest possession of the heights on the right flank. 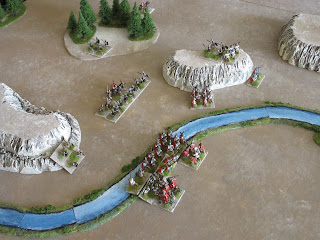 Reaching the bank first, Lusitania were able to contest the crossing, not once but for several bounds. This prompted the proconsul to send his cavalry reserve to turn the Lusitanian flank on the opposite bank. 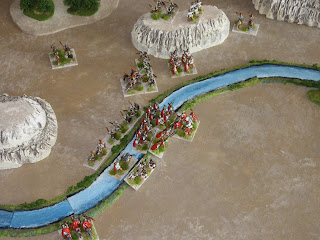 Grim determination was demonstrated on both sides as isolated Roman blade were quickly encircled and on two occasions sent all four enemy elements back. Yet, other elements fell on both sides to have the score remain even 2 – 2, 3 – 3 and lastly 4 – 4 on the same bound. 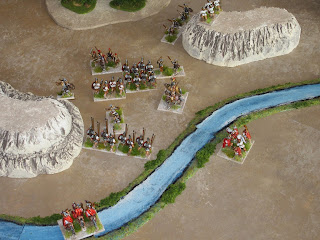 The demise of the Celtiberian mercenaries surrounded by triarii broke the Lusitanian resistance as all that remained on the battlefield were skirmishers filtering their way back to the wood and over the hills.
This was  a 5 - 4 victory for Rome.

Test games two and three tomorrow.
Posted by Timurilank at 00:05