Reading Livy and Polybios we find Hispanic armies were more than willing to confront the Roman army on the battlefield, but at times lacking sufficient numbers would resort to, according to Rome’s tactical thinking, less than honourable means, such as the use of ambushes, raiding parties and night attacks. At times this form of warfare presented Rome with no other option than to deny the enemy their main source of food supply and manpower by sacking the towns and villages within a region. The majority of these, from the most humble sized hamlet to towns and cities were fortified and this brings me to the final stage of Project Rome, the design of a siege game.

These fortified spots had similar characteristics in that they were positioned atop hills, their walls were made of stone and within its walls structures were set close to one another offering a maximum amount of shade but also created defendable spots if the walls were breached. 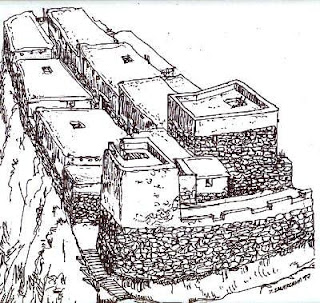 The number of towns captured during a successful campaign, according to Livy, could reach totals in excess of a 100. There are a number of reasons why so many were taken; the fighting men may have been away with the main army, the town elders may have thought it prudent to submit and come to terms with Rome or in some cases the inhabitants did not wish to submit and took their own lives.

Designing a set of siege rules should have the above possibility integrated as options and include others such as supply and the construction of siege works. With the exception of Numantia, sieges did not last long and the design of a rule set should reflect this. From a good basic set it would not be too difficult to expand the scale to simulate the sieges of Saguntum, Syracuse, Carthage or Numantia.

The siege game will use the card system that was developed for the campaign and have the four suites represent four stages or phases of a siege operation and these might be diplomacy or negotiation, the construction or engineering works, supply and lastly, the assault. Each phase will have a list of options for both the Roman and Spanish player and a number of stratagems gleaned from Books III and IV of Frontinus.


We shall be testing these next week and will post our observations a day or two later.
Posted by Timurilank at 01:24