The number of test campaigns for Hispania did not bring Rome in contact with the Celtiberian and during a brief period between painting sessions I took the opportunity to bring the two for the first time to the game board.
Celtiberia selected two difficult hills and three wooded areas of which four were successfully positioned; Rome was able to position one difficult hill deep in a corner out of harm’s way. The Celtiberian still had an advantageous position with a hill on their right and a series of wood on the left that created a channel narrowing in their deployment area.

The majority of Celtiberian were deployed at the base of the channel with skirmishers securing the wood and hill positions. 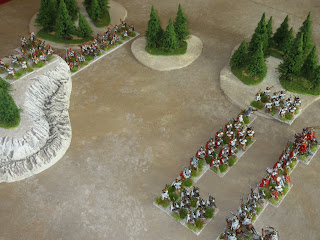 To attack the position, the proconsul deployed the Roman Legion in centre and split the allied legion evenly on both flanks; these would deal with the enemy deployed on the hill and wood areas. Behind the battle line was a reserve formation of allied cavalry and triarii on the left, the proconsul in centre and Roman triarii and cavalry to his right forming a text book deployment.

This report is not a blow by blow description of the battle but I will highlight a number of actions that are noteworthy.

Firstly, the battle was not between even sides as Rome fielded half a consular legion with 18 elements to fight against a Celtiberian tribe of 12. This battle would typify many of the battles encountered early in a campaign year as toward the fall Roman forces through attrition would field fewer troops.

The Rome would need to clear the hill and wood of any lurking enemy before committing the centre; to keep the enemy in fixed in their position, the Roman centre advanced, but at a slower rate. 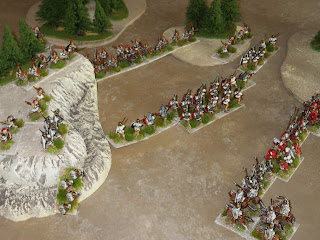 The allied wings discovered that clearing the hill and wood was not as easy as it was thought; both sides lost evenly and by the fifth turn one element of Celtiberian blade were moved up on each flank changing the dynamic on the flanks. At this moment the proconsul was getting nervous and the score was 4 – 2 for Celtiberia. The Roman centre moved to contact to force a decision. 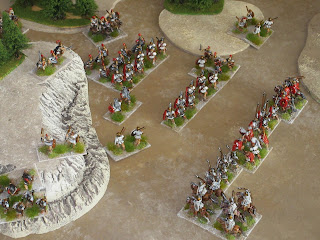 Roman blade versus Celtiberian blade proved indecisive but with a number of even scores for combat results the Celtiberian centre was steadily being pushed back. The single Celtiberian blade on each flank were fighting as savage lions; on the hill one swept the allied auxiliary and pursued them off the hill while the Celtiberian blade on the left pursued out of the wood to be encircled by Roman cavalry, triarii and principes, yet on two successive turns all three Roman units recoiled from the effort. This was definitely heroic work but their demise was balanced with yet another loss for Rome bringing the score 5 – 3 for Celtiberia at the end of turn nine. 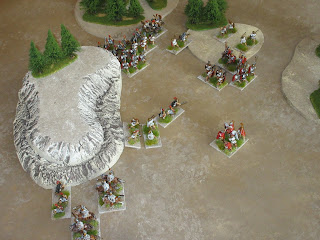 Now bereft of all the reserve formations, the proconsul found himself the target of a lone Celtiberian blade. This final act of desperation proved as ineffectual as the major battle in the centre and at the base of the hill. The cry of “Victoria” came when the dust settled from a small action between two skirmishing units, 6 – 3 for Celtiberia. 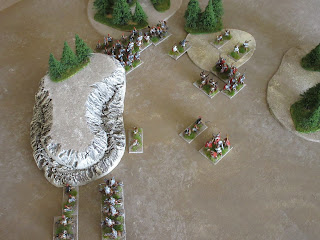