The second Roman legion is painted and will be varnished tonight. All in all, the tempo is moving along which can mean one of two things, I am looking forward to using these or the music playing in the background really grooves. Maybe it’s both.

Between painting spurts I have cleaned and based the final half of the consular army, the Latin legions.

The DBA 3.0 army lists give the Polybian player the option to choose either “fast” 3Ax or “solid” 4Ax for the Latin troops. I selected the 4Ax option for my Hispanic campaign as Livy mentions the addition of mercenaries raised to fill the mobile role.

Old Glory offer allied infantry and cavalry and calculating what was needed, I ordered seven packs; one Roman command, one each Roman and allied cavalry, one each Roman velites, hastati and principes and one allied triarii. After allotting the figures to their proper legions, extra Roman figures were used to fill the vacant allied ranks; there being little difference in weaponry, and I replaced the pilum for spear to convert eight principes to  triarii. 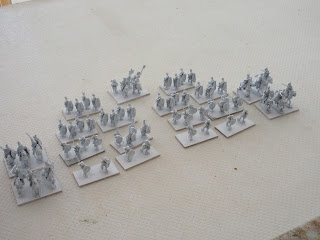 All Roman figures used for the Latin legions were given plumage built up from Milliput to give them a uniform appearance.  Bottom line, every figure ordered is now used for the consular army. I need order one general officer to base with four foot command figures to make the third commander.


Armies of the Macedonian and Punic Wars by Duncan Head
I recently ordered by copy from Amazon UK and am very pleased with the new format; I do hope the other books will follow in the same manner. The book is more compact than the older WRG publications and the printing is now larger which would account for the increased number of pages (353). There are two introductions, the one for 2016 is 11 pages long and details the significant changes based on research over the past 30 years. The supplementary bibliography also reflects additional research done over the same time period, I for one I am grateful for the extra references of use for this project. 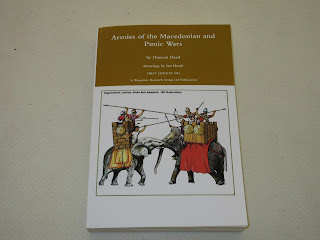 Cheers,
Posted by Timurilank at 00:15