On the periphery – the Caucasian kingdoms (Iberia)

Bordering Lazika is the mountain kingdom of Iberia. Strabo describes the region with its important passes in his work Geographica. Not all of the Iberian passes create a bottleneck for north – south traffic, but others border on the western kingdom of Lazika/Colchis.

The plains offer ample space for an agrarian based economy. Of the three kingdoms, information is readily found covering the history of Iberia. I did find extracts of from Georgia in Antiquity: A History of Colchis and Transcaucasian Iberia, 550 BC-AD 562” by D. Braund and this is definitely on my book list.

The many descriptions of Iberian troops mention them covered with animal skins. Whether these are headdress, cloaks or coats are not mentioned, but I will put the Milliput to use tomorrow and create a mix.

Every figure has an animal skin headdress with the exception of the General and guard; the leader has a fur trimmed cloak.

As these figures all have cloaks giving them fur jackets or trim is rather pointless as it would be difficult to see. 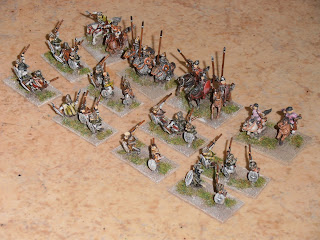 As with all my milliput tasks I have much left over, so the excess went to adorn spearheads (horse tails and skulls) which will be used as standards.