Today, I want to focus on the exterior of the castle. From the selected castles I used as references, much of the exterior has been converted to accommodate changing taste over the past five or six centuries. Gone are the embrasures, crenelated walls and arrow slits. These I shall sketch and cut out from the individual sections.

With the castle keep and tower at its highest point and the gatehouse at the lower end of the perimeter. I will need to lower the gatehouse by 5 – 10 mm and add that much to the structures at the rear.

That step completed, the embrasures now need to be added to the exterior surface. This is easily done by trimming a few millimeters from the wall and ending about 5 mm from the lower roof edge. Indentations can be made with a sharp tool or pencil point.

At this moment no structures are fixed to allow freedom of composition. 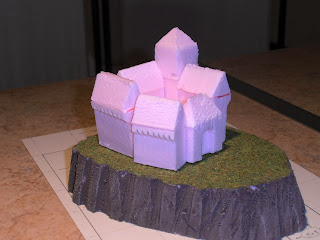 Note, the castle base has been trimmed back. This is fine, as I will add rock formations around the base with the cuttings saved from step one. These will be added as a final step before undercoating.

But next, the interior.