Transport by land and river

One of the nice aspects of creating this campaign is the discovery of lesser known information of everyday life of the late medieval period. Researching for this topic, travel by land or water slowly built up files about horse breeds, carriages, Water Boards (waterschappen), toll ways, piracy, guild system and more.

Over Land
By the Late Medieval period, roads between commercial centers were better maintained and supported by levying tolls or pavage. A pontage, would allow usage of bridges along the route. The advantage to this, one could use wagons to haul goods and depending on the cargo an armed escort could be chartered to protect valuable goods moving between centers. Away from the “road” network, goods moved over tracks using pack horses. All, were not without risk.

Moving livestock to market, farmers made use of drover’s roads; wide enough to accommodate the movement of flocks or herds and with ample grazing on either side. 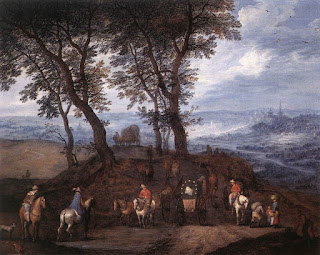 If medieval man needed to travel longer distances overland, the horse (hackneys) remained the best form of transportation. There is much discussion about which were the better breeds to ride, but the fact remains a variety were needed when a noble and his entourage went visiting his estates. With a shortage of suitable inns, supplies needed to carried on the backs of pack horses (sumpters).

Over Water
Since our campaign centers on realms within the Holy Roman Empire, travel by water meant along the waters of the North and Baltic Sea or by the great rivers. With the exception of the Danube, the majority of rivers within the Empire flowed in a north-south direction. The variable depth of rivers sometimes meant using a combination of water and land routes necessary. As with roads and bridges, one could expect to pay tolls for stretches of waterway between towns to offset the cost of clearing debris, soundings made, and the maintenance of canals, dikes and the like. 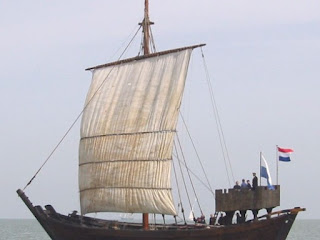 By the start of the 15th century, ship and boat types remained for the most part cogs, hulks and barges. Shape had not changed much, but the addition of a rudder and a second or third mast helped improve the use of ships for commerce. More on this topic when I describe the roll the Hanseatic League played during this time.

The Perils of travel

Other than bandits and pirates that prowled the seas and land, there were the added danger of natural predators; wolves, wild boar, and bears. Traveling in company with an armed escort helped deter impromptu attacks from small numbers of outlaws, but this period was also rife with nobles waging their own level of banditry with their well-armed retinue. 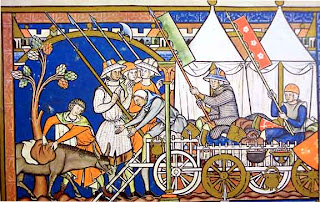 Ships traveling the North and Baltic Seas had their share danger. The coastline from Friesland (Frisia) to Prussia was dotted with inland havens which served as pirate bases. During the numerous wars between the Scandinavian kingdoms and the Empire a number were employed and given charters to operate as privateers.

For the Game Table
In the campaign, Storm Within the Empire, scenarios can be generated to play out banditry or plunder raids using fewer number of elements. These can be interesting as if successful can bring a degree of economic discomfort by the losing side, which in turn may escalate to a force of arms.

There are sufficient numbers of wagons, civilians and animals to bring life to the game table. What I do lack at the moment are naval items; cogs, boats, barges, harbours and fishing villages. Added to the project list.
Cheers,
Posted by Timurilank at 01:44