Last week we play tested DBA 3.0 with two Late Medieval armies taking the field. A long time veteran of DBA, this was Lex’s first game with the new version. He thoroughly enjoyed the game a rule set he made the decision to collect his own late medieval army, The Frisians.

Frisian Freedom (Eala Frya Fresena)
Out of curiosity, I searched among the Dutch, German and English sources on the Internet and was able to piecemeal a brief history of “Frisia” during our campaign period. Of note, Bavaria Straubing held domains in the Low Countries, so historically they did clash with the Frisians on a number of occasions. The area labeled Frisia is now modern day Friesland and Groningen. Oost-Frisia or East Frisia is now Northwest Germany. 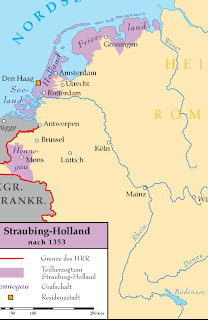 Geography
Situated along the north coast line with dunes, forest and swamp area, Frisia like its neighbor East Frisia, retained a certain independence which sidestepped the establishment of a feudalistic structure as was developed elsewhere throughout Europe. Free-Frisia, as it was known, organized itself into semi-collective of parishes from which governing officials were elected on an annual basis.

The coast was dotted with fishing villages while further inland cities grew from trade centers, a number which did gain full rights. The city of Stavoren as an example, became a member of the Hanseatic League and was renown as commercial center for wine, beer, natural stone wood, grain and fish. 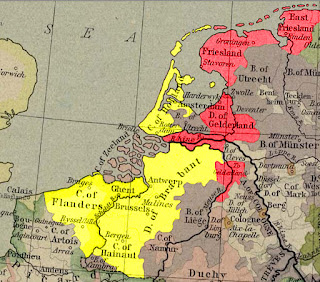 Political Structure
From the breakup of the Carolingian Empire, Frisia became a favoured location for Nordic settlements. Despite the expansion of the Bishopric of Utrecht in the north, the 11th and 12th century, Frisia firmly remained independent. Exercising influence over the parishes were the “chieftains” or clan leaders. Internal grievances were quickly put aside when external threats arose and from my reading this was rather frequent.

Under John III, Duke of Bavaria, there are five attempts at subjugating the Frisians. None were successful. The Hanseatic League in an attempt to stamp out piracy conducted from the havens in Frisia were also defeated.

Military
The Frisians of the 14th and 15th century should follow the IV/13e Free Canton army:

Looking at the list it seems at first glance heavy in number of spearmen, when in fact the majority of expeditions sent to subdue the Frisians failed. While spearmen are perfect for defending tight spots, the countryside is predominately, dunes, forest and swamps necessitating a few more loose formation types. The Frisian chieftains formed loose alliances with bands of pirates who would qualify as Ax or Ps. The Frisians were also joined by a large number of peasants, possibly 5Hd. 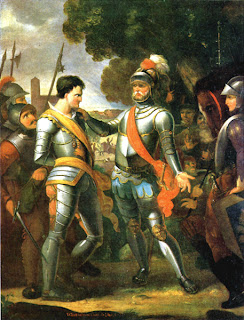 This is by no means a list recommendation, but for our campaign purpose, the Frisians would have the following list:

Aside from piratical raids along the sea trade routes, the Frisians remained well in their boundaries, so an Aggression of 1 remains unchanged.

Cheers,
Posted by Timurilank at 13:21