Charles is born to the second wife of Pepin, Alpaida, unfortunately, there are no records of his early activities before 714. Pepin’s eldest son, Drogo, died in 707, leaving the next eldest, Grimoald, Mayor of the Palace of Neustria, to continue with his responsibilities. Grimoald would die in the same year as his father in 714.

On his deathbed, Theudoald is named Mayor of the Palace of Austrasia by Pepin of Herstal and in Neustria, King Dagobert III, names Penfriend as mayor the death of Grimoald, thereby initiating a period of crisis.

The crisis escalates as King Dagobert III dies and is succeeded by Chilperic II, igniting a civil war between Theudoald of Austrasia and Chilperic II. At the Battle at Compiègne, Theudoald is defeated and flees to Cologne. Chilperic II pursuit gathers allies en route to Cologne.

The Battle of Vincy, near Malmedy, was a major victory for Charles and returning back to Cologne begins consolidating his power.

Chilperic II and Raganfrid create an alliance with Odo of Aquitania, together they met Charles near Soissons. This ended in disaster for the coalition and concluded the civil war. Chilperic II, Raganfrid and Odo make peace with Charles, now the undisputed Dux Francorum.

Radbod I dies, leaving Frisian resistance against the Franks fragmented. Bodda (Poppa) succeeds his father and is quickly attacked by the Franks, advancing as far as Lake Flevo, leaving Poppa no other option but to conclude a truce with Charles.

The campaign in Frisia now concluded, Charles marches against Duc Aldgisl of the Saxons, near the headwaters of the Ruhr and Lippe rivers. The year 720, also marks the initiation of missionary activity in the region.

Campaigning in Bavaria, to reassert Frankish suzerainty over independent Agilolfing dukes, a revolt in Neustria forced Charles must to turn his attention west.

The revolt in Neustria, led by Raganfrid, the late mayor of Chilperic II, is quickly concluded and hostages are taken. Charles resumes his campaign in Bavaria, passing through Swabia he gathers troops to join in the campaign.

After a campaign of three years, Duc Hukbert of Bavaria submits to Charles and relinquishes hostages.

Alarmed at the subjugation of Bavaria, Duc Lantfrid of Swabia rebels, but is slain in battle. A successor is not named by Charles so it might easily be amalgamated with neighbouring districts.

In the spring, Abd al-Rahman ravages Aquitania taking Bordeaux and defeats Eudes (Odo). Charles interrupts his northern campaign to aide Eudes against the Saracen incursion and together, they defeat the Muslims at Poitiers recapturing all the plundered wealth of Aquitania. Bordeaux is retaken, but the Saracens still retain territories in Septimania holding it for another thirty years.

After Poitiers, Charles reforms the military, creating a class of warrior able to fight mounted, thus replacing the previous reliance on county militia. This was made possible through a re-distribution of land, seeding a ‘fiefdom’ loyal to Charles. The county militia did not disappear, but remained as a reserve force.

Charles is forced to resume his fight against the Frisians and at the Battle of Boarn, he kills Poppa, leaving a disorganised Frisia at the mercy of the Franks.

The Muslims resume their offensive and from Narbonne (Arbuna) march toward Provence, seizing Arles and Avignon. Burgundy is also pillaged. In the same year, Eudes of Aquitaine dies and his son Hunald I is named successor.

An expedition to Provence, Charles receives the submission of Mauronte, Duc of Provence. Charles descends the Rhone valley to lay siege to Avignon, and Muslim reinforcements sent to aid the besieged are defeated at the Battle of La Berre.

Allied to Charles, Liutprand, king of the Lombard, retakes Provence and those who collaborated with the Saracens have their lands forfeit. The Muslims retain only Narbonne which eventually falls to Pippin the Younger.

Charles Martel dies on 22 October and is buried in Saint Denis Basilica in Paris. Continuing the tradition, the kingdom is divided among his three sons; Carloman receiving Austrasia, Alemannia and Thuringia; Pippin the Younger, Neustria, Burgundy, Provence, Metz and Trier; and Grito is given several lands throughout the kingdom. 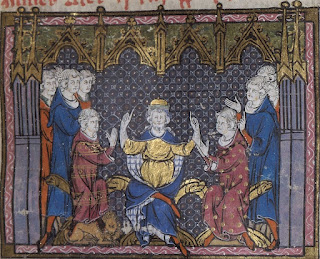 Compiled from the following: