The Frisians of King Radbod

The region of Frisia, during the time of Charles Martel, covered a wider area than it does today. The coast line stretches from the Scheldt River in the south to the islands enclosing the South Sea and at its heart was the major trading centre, Dorestad, which also served as a mint for a number of Frankish rulers of the 7th century.

As a crossroad for trade between London, Cologne and Paris also saw the appearance of missionaries at this time. Like their Saxon neighbours, the Frisians resisted spiritual conversion and remained pagan until the bitter end.

Pepin of Herstal, Mayor of the Palace, would attempt to bring Frisia into the domain of the Frankish kingdom and gain control of the lower region of the Rhine and Meuse rivers. In 689, the Continuations of Fredegar records, an army led by Pepin fought the Frisian forces of Radbod near Dorestad, the result of which put the Frisians to flight leaving a repentant Radbod to sue for peace.

The southwestern portion of Frisia under control of Francia, Utrecht was lifted in status as a bishopric for the region. Under the leadership of Willibrord, his missionaries would continue their work to the northern and eastern regions of Frisia.

Pepin of Herstal had unified the kingdoms of Neustria, Burgundy and Austrasia by the time of his death in 690.  Now considered part of Austrasia, Frisia remained defiantly independent and pagan, as recorded by Church documents. Their leader, Radbod, who ruled from 680 to 719, seized the opportunity in 714 to resume the offensive and retake Utrecht, sending Church leaders and monks fleeing south. Making Utrecht the new capital of Frisia, Radbod marched to Cologne and assist his new ally, Raganfrid, mayor of the palace of Neustria, in his struggle against Charles Martel.

To refight the Frisian-Frankish wars, one might first think to use the Carolingian list (III/28 639 AD – 888 AD). Eric Ter Keurs in Slingshot 241, ‘Met Spere ande Skeld, Building a Medieval Frisian Army for DBM touches on this issue and recommends using the Frisian list of II/73 and extend the date for the Battle at Cologne.

Eric Ter Keurs further points out, Frisian nobles, who could afford horses preferred to fight dismounted. To reach Cologne however, Radbod made use of his fleet thereby limiting the number of horses, if any, to accompany the army.

The absence of Frisia as ally of the Neustrian in DBA3 is correctly noted in DBMM with the caveat, only for 714. A future scenario for the siege and battle at Cologne will see the Frisian host as warriors (4Wb) with skirmishers (Ps). The extension of end date for Frisia might also include the pacification by Charlemagne ending in 793. 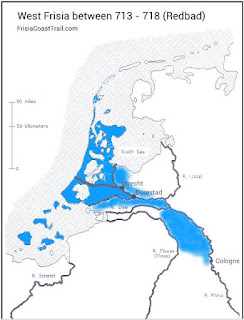