Jean Bureau’s artillery supported by franc-archers easily repulsed repeated attempts to storm the camp. French few losses were those unlucky to be picked off by English longbowmen. France 4-2. 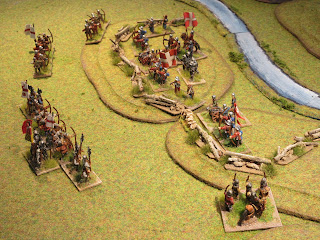 Two changes were made which levelled the game; artillery fire was reduced as pieces were considered dispersed along the palisade similar when behind a city or fortress wall and secondly, the loss of the franc-archers at St. Laurent were counted against France, giving England a 1-0 score to start.

This had the immediate effect of the English making a mad dash toward the French camp bringing the longbowmen well in range of the franc-archers. The English line did buckle but men-at-arms were able to reach the palisades to begin scaling its defenses. Both sides tenaciously fought in the ensuing moment with casualties mounting as both sides reached an even 4-4 score. French skirmishers fell under the blows of English hammers and swords to tip the balance and give England a well-earned victory after eleven turns. England 5-4. 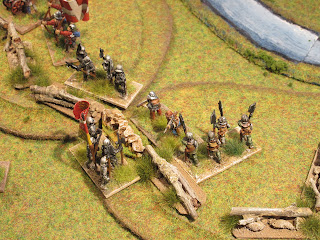 Game conditions remained the same as per game 2 and Fortuna blessed both sides with an abundance of pips for the at the start of battle. Archers on both sides found their mark, but poor communication among the English (low pip scores) meant the majority of the troops were hesitant to advance. The few men-at-arms that did scale the palisades created havoc among the French. Then disaster struck, as the desperate fighting among the French artillery, Talbot fell dead. Seeing his banner fall, the English fled the field. France 5g-4. 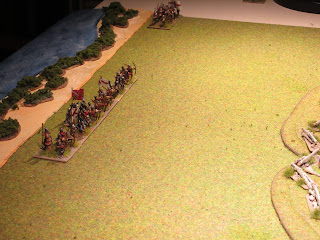 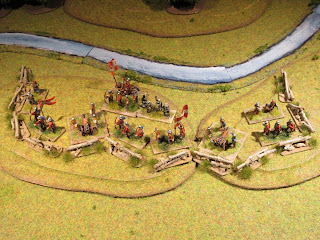 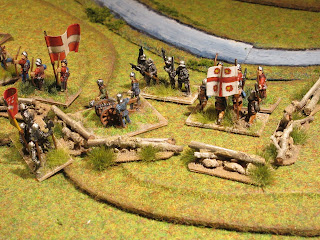 Very enjoyable and the adjustments made in game two and three build more tension in the battle. There were a number of subtilties learned in storming a fortified position, but these I shall keep in my breast-pocket as ‘technical-tactical-tips’. Enjoy the game.