Army list IV/13d Medieval German is also known as the Maximilian Imperial in the DBR rule book. Maximilian Imperial is a better description as it covers the campaigns of the army in France, the Low Countries and Italy. The original plan was to build to commands, each representing a minor German State such as Brandenburg, Holstein or Pomerania, however researching deeper into this subject I discovered the 13d did not suit the armies raised by the northern German States, so more figures will need painting.

In the meantime, pictured below are two commands of Imperial Germans complete with knights in their deep formations and plenty of landsknechts ready to fight the French in the Low Countries or the Venetians in northern Italy.

The commanders have the standard black double headed eagle on a yellow flag. The field of each gonfalon is split indicating Imperial service and their particular domain. The links below offer some inspiration.

Each element of Landsknecht pikemen have one flag identifying the unit with a second their employer, the Imperial House. This follows the standard practice so Landsknecht flags posed little problem to paint. 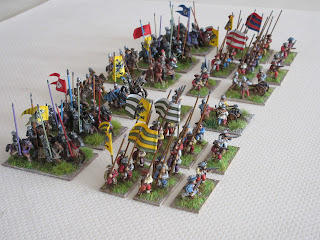 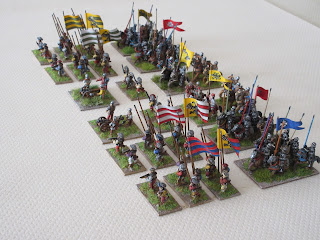 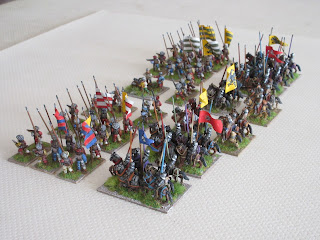 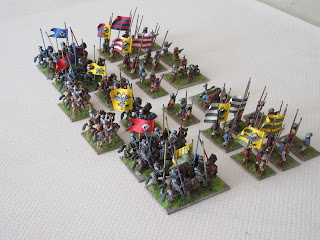