The Seleucid vs. Graeco-Bactrian

In 238 BC, Diodotus governor of Bactria, used the Parthian rebellion to assert his independence. Seleucus II planned expedition would seek to recover the region, first dealing with the Parthian before moving against the Bactrian province.

This historical conflict continues the usage of one command enlarged to 24 elements. The composition of both forces is listed below with the Graeco-Bactrian fielding both options listed to reach their total of 24 elements.

Seleucus invades the territory of Bactria which is characterised by steppe terrain features; two gentle hills, and rocky or scrub ground.

Game one
The Bactrian with superior numbers of mounted troops easily stretched their battle line beyond that of the Seleucid army. At the start, the Bactrian quickly enveloped the Seleucid left, but in the ensuing combat came off the worst for their effort. Incurring heavy casualties (3 – 0) the Bactrian commander probed for weaknesses between the phalanx and left wing. This proved successful with the destruction of units to include the elephant and chariot corps bringing the score even (5 – 5).

Alarmed at the breach in the line, Seleucus led half the phalanx to stave off the impending Bactrian threat. Caught in the cavalry maelstrom, the Seleucid general became wounded generating a panic among his troops. Sensing the indecisive activity among the Seleucid, the Bactrians seized the break in combat to reform their troops for the decisive blow.  This came giving Bactria a victory over Seleucus, 5 – 9 + CinC. 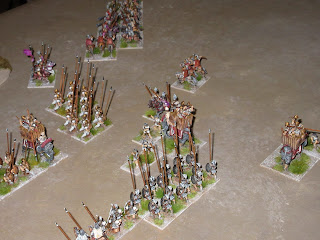 Game two
Seleucus now formed two wings with the right wing positioned forward. This comprised of the phalanx, elephant corps and supporting infantry. The supporting wing on the left contained the chariots and Xystophoroi. To counter this, the Bactrian placed their phalanx in centre with Iranian lancers positioned in support to the right of the phalanx all the Greek cavalry. Extending both flanks were all the Bactrian light horse.

As the Bactrian phalanx marched steadily forward, Bactrian light horse attacked the Seleucid right forcing their commander to send troops to recover the situation. Unfortunately, the situation became critical as parts of the Seleucid phalanx had to face new threats on their flank. In the melee that followed, casualties fell heavily on both sides with the Bactrian having a slight advantage (5 – 7). The final stroke came when Bactrian reserves charged the Galatian mercenaries cutting them down to a man. Victory Bactria 5 – 9. 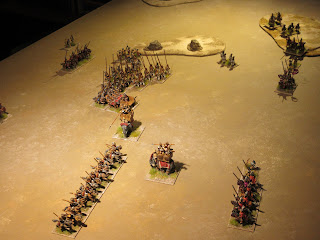 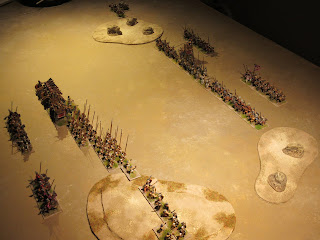 For a period, weather conditions hampered proper signalling (poor pip scores) on both sides and after an hour (four turns) both armies shuffled forward to meet in the centre. 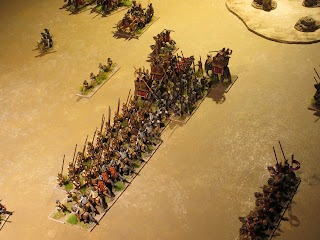 Iranian lancers charged Seleucid phalanx and held their advance long enough for supporting troops could turn its flank. At the same time, Bactrian light horse now threatened the Seleucid left raising alarm bells for their commander. To contain the threat, Seleucus moved the Xystophoroi held in reserve and chariots to contain the Bactrian threat. This became critical as Seleucus became wounded and was carried off the field leaving overall command of the army to his second in command (1 – 3 +SCh + CinC). 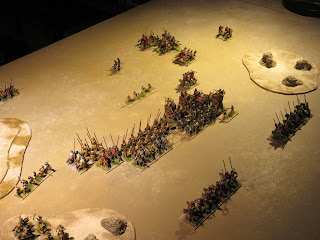 Assessing the situation, the second in command moved forward to reform troops. In this moment, the Bactrian redoubled their efforts to take out the chariots and an elephant to widen the gap between their centre and left wing. 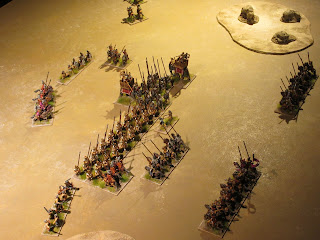 Avenging their general, the Seleucid phalanx charged the Iranian lancers. Galatian mercenaries joined the battle by attacking the Greek cavalry to their front. The renewed effort tipped the balance leaving a stunned Bactrian general no option but to leave the field. Score Seleucid 7 -9 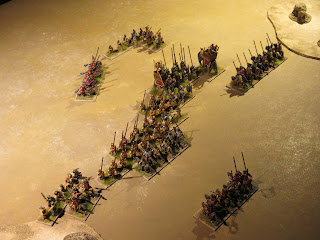 Note:
The loss of the CinC counts as two elements when calculating scores. In both these tests, the loss of the CinC meant overall command moved to the sub-ordinate. Command distance is measured from the subordinate general (8BW) which in both cases left a number of troops outside coverage. Those troops beyond command distance still require the additional pip cost to move.