This week’s post brings a return to the standard game and a historical matchup between two armies of the Biblical period. The early Egyptians have seen action, but not the Nubians. To be honest, bow heavy armies do not rank high on my and that is the reason for their late appearance. These were added to the biblical collection as they were frequently at odds with the Egyptians. Army list for the armies can be found below.

Game one.
Both side reinforced their right wing with an objective to turn the other’s left flank; the Egyptians used their  menfat for this task while the Nubian grouped their warriors supported by skirmishers for a similar objective. As the battle progressed, the Nubian attack on the right was effective but Egypt in response quickly evened the score. The Egyptian attack however, now threatened the Nubian line of archers prompting their general to embolden his next move. Ignoring the impending threat on their left, the line of archers moved forward to launch a fire storm of arrows quickly thinning the Egyptian ranks (3 – 1). The Nubians countered the menfat assault bringing the axemen down in the ensuing melee. Score 4 – 1 for Nubia. 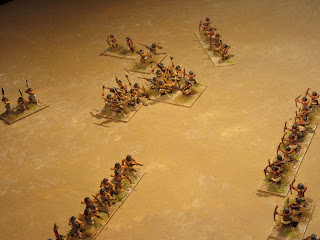 Game two.
Both sides changed their battle line by extenting their formation while foregoing the placement of a reserve. As the battle progressed, mixed signals among the Egyptians hampered their advance (low pip scores) which the Nubian quickly took advantage of to envelope the enemy left. Casualties fell quickly on both sides giving Nubia a slight advantage (2 – 1). However, the gods displayed their favour on the Egyptians as their arrows struck true sending a wave of panic among the Nubian ranks forcing them to leave the field. Score 4 – 2 for Egypt. 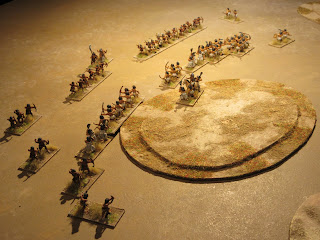 Game three.
With a few minor changes both sides deployed in similar fashion to their previous battle. 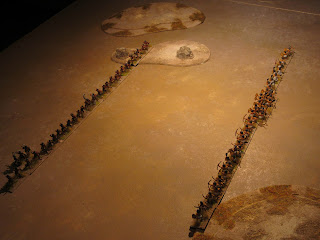 Troops on both flanks quickly enganged while the centre of each army advanced slowly forward. The Egyptian menfat on the right, destroyed a unit of archers, but their success was frustrated by the fierce resistance of a second unit of bowmen. The Nubian assault on the Egyptian left met with similar resistance, but Nubian archery created a wave of panic among the Egyptian ranks scoring three casualties. 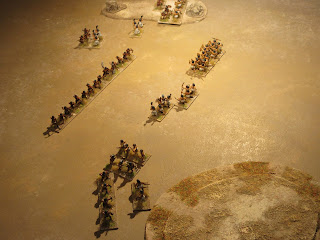 In desperation, Pharaoh attacked the Nubian line of archers destroying a unit of bow and success elsewhere brought the score even, 3 – 3. On the battlefield, four separate combats could be seen locked in combat, but the final stroke came when Nubian warriors destroyed another unit of Egyptian bowmen to end the battle. Score 4 – 3 for Nubia. 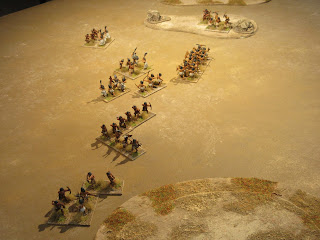 Comments
My initial reservation about bow heavy armies has changed some. Although the Egyptians could field four bow the Nubian could easily double that number. To better support the Nubian warband I exchanged two bowmen for skirmishers (Ps). The two extra skirmishers worked well in turning the Egyptian flank in all three battles.