899 AD, refighting the Battle of Brenta


On the morning of the 24th of September, King Berengar and his nobles were expecting another full day of negotiations and more delay with the Magyar leaders. The camp was bustling with the preparation of breakfast when scouts sounded the alarm; the Magyars were approaching in force and seemed intent on battle.


A panic swept through the ranks as many nobles could not agree on a course of action, yet despite the delay King Berengar was able to form a line of cavalry that would hopefully be able to cover the slower moving infantry columns. 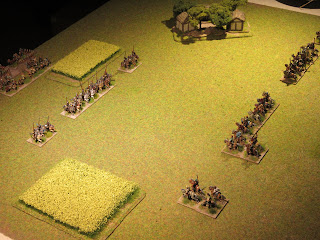 With the Italian camp caught by surprise, the Magyar had ample time to form their battle line. On the right, a column of horse archers moved quickly around the village to approach the Italian army on their left flank. The remaining three groups of Magyar moved forward in echelon with their warlord leading the first group striking the Italian knights positioned nearest the village. 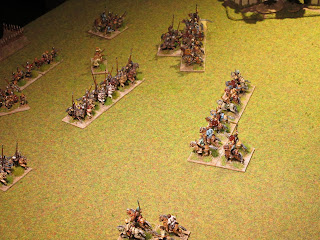 Assisted by a body of archers, these knights successfully repelled the Magyar effort near the village. To the rear of the Italian knights, columns of Italian militia were forming to cover their army’s flanks and provide support for the king positioned in centre. 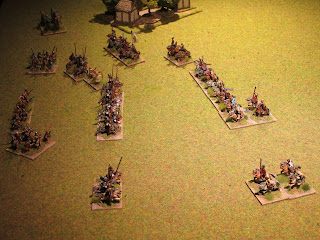 The Magyar heavy cavalry renewed their attack to destroy the bothersome archers and sent the Italian knights back on their heels. The situation was saved by the timely arrival of militia.  Events took a disastrous turn as Magyar horse archers assaulted the Lombard centre; here the king was severely wounded by an arrow and carried off the field. A sense of despair swept through the Lombard ranks (2+g – 0). 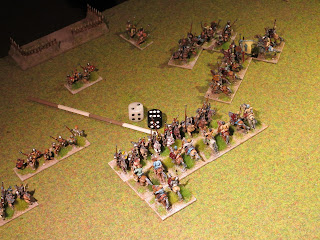 The Magyar quickly followed up their success by surrounding the knights in the centre bringing one of their numbers down. Further casualties fell on the right delivering a crushing defeat for the Lombard (4+g – 0). 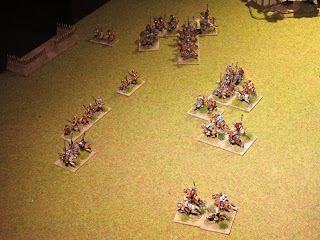 Design notes.
Writing a scenario to include an element of surprise is a difficult task and Brenta was no different. Despite the defeat for the Lombard in this test, they won decisively the first five games generating much consternation. How did the Magyar manage a victory?

I then remembered a while ago writing a series of stratagems for the Punic campaigns which did duplicate the surprise on an enemy camp. This was done by adjusting the deployment area of each moving the attacker closer to the enemy camp. The two battle lines were positioned 6BW from each other resulting in the defender positioning his troops closer to camp. This replicated well the moment when the Italians were attacked during breakfast (Andrea Frediani).