894 AD, refighting the Battle of Buttington

An Anglo-Saxon army had caught a Danish host harrying the Welsh border and laid siege to their camp. After three weeks, the situation within the Danish camp was a desperate one; men were dying of hunger and all animals had been slaughtered and eaten. King Hastein gathered his warlords for a final council and how best to escape this predicament. The Welsh have now joined Aethelred blocking the hilly route to the north allowing the Anglo-Saxon to regroup their forces to block the three remaining escape routes. A decision was reached and a break out would be done by dawn’s early light. 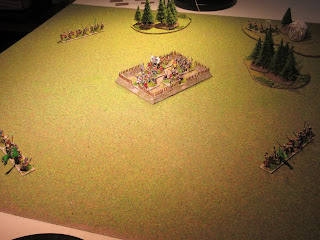 Carefully removing palisade sections and branches, the Danes had gone no further than 160 paces before Saxon horns sounded the alarm. Springing into action, the Danes quickened their pace and moving in three columns toward the Severn River to the west. In each of the camps men were tumbling out of their bedding and gather their weapons to form their battle line. 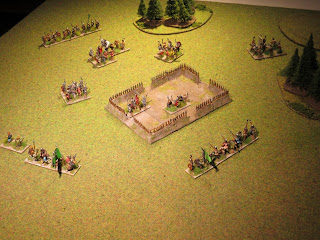 From his position, Aethelred could see the route taken by the Danes and sent his javelinmen to harass the Danish column on the left and delay them and allow the fyrd to deal with them. To the north the Welsh could be heard screaming their ‘war cry’ as the sprinted off the slopes to attack another Danish column. In the centre of the Danish horde, Hastein could be seen bearing down the waiting Saxon wall to the west. 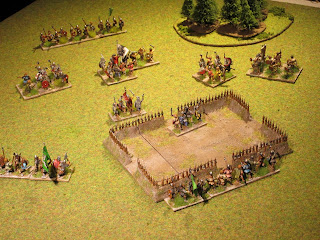 It seemed a few heartbeats had passed since leaving the camp, but Danes now found them battling against a determined Saxon resistance and to their right, Danes were hotly engaged with the Welsh 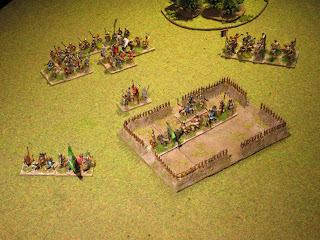 The battle now became total confusion as both sides were pushing each other back and forth. In the end, the berserkers sacrificed themselves to help Hastein gain ground and breach the shield wall (note the presence of black robed monks singing their joy over the bodies of dead pagans, 1 - 0). 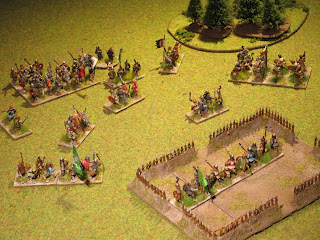 Aethelred and Aethelhelm quickly brought their troops into the general engagement. 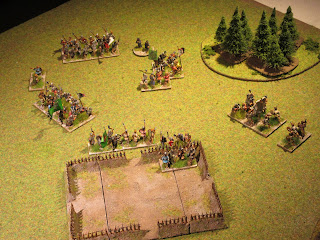 In their battle fury the Danes caught an isolated unit of fyrd and destroyed them, but this small victory could not slow the Saxon killing lust, 2 – 1. 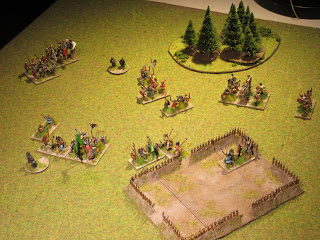 Redoubling their effort, the Saxons routed the Danes but not without further cost. The chroniclers record a great victory over the heathen with ‘little losses to the Mercians, 3 – 2. 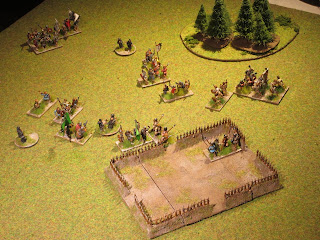 Design notes.
This scenario was fun to do and both sides were able to record victory. On one accession, the Danes beat the snot out of the Saxons (4 – 2) so the scenario was deemed balanced despite the Danes starting the game with nine elements versus twelve for the Anglo-Saxon.

The Saxon player should note that some troops surrounding the Danish camp will be beyond command distance and to move those costs an extra pip. The Welsh have a greater move distance so these need not move every turn.

The Danes may choose any of the board edges for their escape, however, the north side may prove difficult as this is blocked by wood and a difficult hill. Movement within the camp is over good going and there are no movement penalties for exiting it. Deploying in columns to exit the camp decreases the need for pips; however you will want to avoid being caught by the enemy while in such formation