Historical Match up - Later Visigoths vs. the Suevi

Leaving Roman Gaul in 409, the great migration of Vandals, Suevi and Alani crossed the Pyrenees and entered Hispania. They met little resistance as troops were busy fighting in external conflicts leaving the Germanic tribes free to find locations to settle in. A century later, the Suevi had firm control over the northwest part of Hispania that would later become Galicia. It was here that the Visigoths would meet stiff resistance.

According to the DBA rule book, the Suevi count 'forest' and later 'arable' terrain as homeland geography. That would be changed to 'hilly' to reflect the landscape characteristic of Galicia. The Suevi may have the Greuthingi as allies, but it is doubted such interaction last into the 6th century however, not all the Alani joined the Vandals in crossing into Africa; some did settle in Lusitania and for this series of test games, the Alani substitute for the Greuthingi as allies.

Game 1
The Suevi, seen on the left of the photo, have both flanks resting on woods. Suevi two wings with the infantry on the right and the cavalry and allies forming the left. The left wing are supported by Suevi archers. Opposite them the Visigoths have deployed their troops to mirror the Suevi deployment with their formidable cavalry making up half their number. 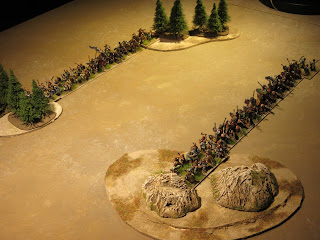 Both armies keep pace with their infantry keeping the appearance of an unbroken line. Suevi archers have deployed at the edge of the wood. 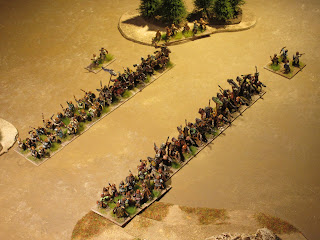 The shock of the two lines meeting reverberates across the battlefield and it is not long before Visigothic cavalry are sent recoiling from archery fire. The effect of the archers and Suevi cavalry is immediately felt, (2 – 0). 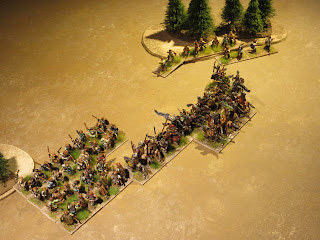 The crucial moment came when the Suevi general caught his counterpart in the flank bringing their commander down. Seeing the Draco standard fall, the Visigoths lost heart and fled the field. Score 4g – 0 for the Suevi. 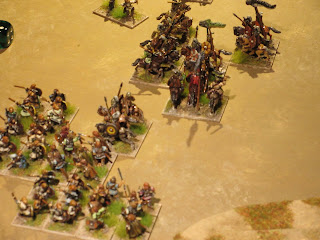 Game 2
The Suevi now had the advantage of ground and so placed their infantry to secure both hills leaving the cavalry to deploy on the valley floor. The Visigoths deployed in a similar manner as in their previous battle; two wings, one of cavalry and the other of infantry. 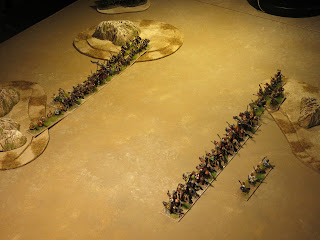 To counter the Suevic archers positioned on the hill, the Visigoths sent their skirmishers to deal with them. This manoeuvre required some time forcing the Visigothic battle line to move slowly forward. The Suevi viewed this as timidity on the part of the Visigoths and so moved off their defensive position. 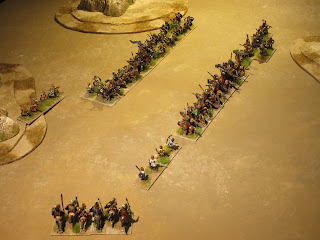 As the battle lines came together, the Visigothic skirmishers were countered by Suevic skirmishers leaving the Suevic archers free to find other targets. 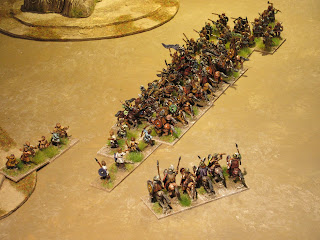 In the ensuing battle, lines broke as both sides forced their opponents to recoil. Here, the Suevic infantry bested their opposition earning them a narrow victory. Score 4 – 3 for the Suevi. 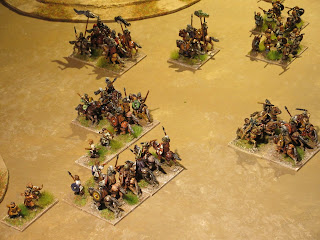 Game 3
The battlefield for the final engagement offered both sides the protection of each army’s left flank; however, the Visigoths would be wary of the hill opposite their right as this would become an ideal position for Suevic archers. 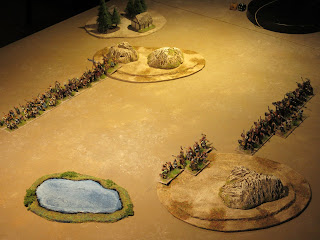 To counter that threat, Visigothic skirmishers were sent to clear the hill of the archers. During this time, the Visigothic cavalry would need to wait patiently before moving forward. The Suevi noticing the delay moved their infantry forward to seize the occupied hill nearest the lake. The attempt by the Visigothic skirmishers to clear the hill failed leaving the Visigothic commander no option but to risk an all out assault before the Suevic archers could regroup. Visigothic infantry moved off their hill position to support their cavalry assault. 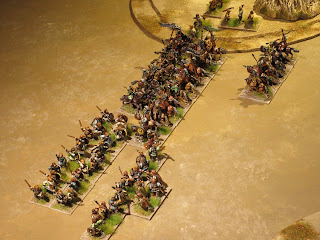 The situation heated up as both of the Suevic allied cavalry fell bringing the score even. Suevic infantry were able to form a line in front of the Visigothic cavalry. 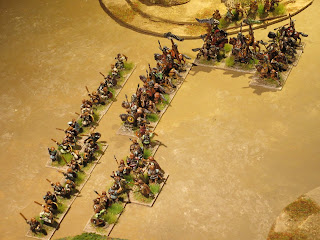 Visigothic cavalry however, were able to break up the Suevic battleline and together with the Visigothic infantry created enough casualties to earn a victory. The final blow came when the Suevic commander fell making this into a decisive victory for the Visigoths. Score 7g – 3 for the Later Visigoths. 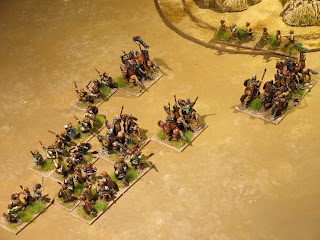 Note:
For the selection of terrain pieces we used the Random Terrain Generator which can be found at the Fanaticus Forum.