Continuing the ‘Migration to Kingdom’ project it will now focus on the events surrounding the formation of Francia Latin or the Middle Frankish of the DBA army list (III/5). Over the next 143 years the Middle Franks will expand their control over the territory of former Roman Gaul to reach parts of the Pyrenees, the Italian Alps and large territories to the east of the Rhine.

From a campaign perspective, the sixth century AD would provide players with frequent external wars followed by internal conflicts to keep it. Beginning with the partitioning of Francia into four realms following the death of Clovis in 511 AD we slowly find the realms taking a definitive size a century later with the creation of Aquitania, Provencal, Burgundy, Austrasia and Neustria. 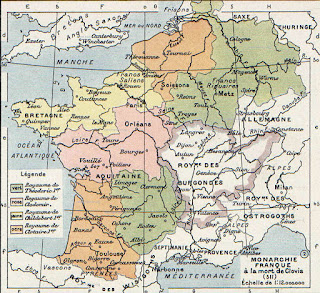 Readers wishing to delve deeper I can recommend The Merovingian Kingdoms 450 - 751 AD, by Ian Wood.


The Miniatures.
I have Franks in my collection, but I wanted to build an army that would best reflect the transition from the multi-striped tunics to the fashion worn by the Carolingian. I followed a similar approach with the shields.

In the photo these can be seen in column formation with lighter coloured shields. Further back are the tribesmen with a variety of darker coloured shields. The cavalry or nobles (3Kn) are also Gothic heavy cavalry from Old Glory painted in a similar style. The commander lacks his banner, but as soon as I find something suitable, this will be added. Looking at the two army sub-lists, the only difference between them are the number of spear armed Gallo-Romans (Sp) present in each. The armies of Neustria, Aquitania and Provencal may field more militia and have an option to have their tribesmen as 3Wb. 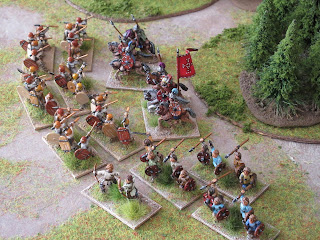 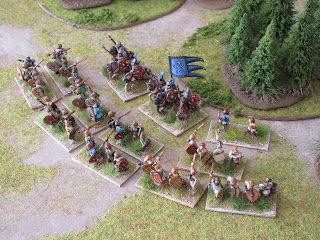 Flags/banners
I did find a reference to a ‘red’ banner carried by the Neustrian army, but no detail was given describing size, shape or other design features. Using a wargamer’s logic the size and shape could follow a similar style carried by other armies; the Byzantine come to mind as they did interact with the Merovingian Franks.

As to what designs or features formed a blazon on such flags, we do know the Merovingian were an Orthodox Christian kingdom and therefore a cross would seem a likely feature. I would not rule out the lesser mobility carrying standards depicting animals such as a bull, eagle or boar.

Following the death of Clovis, the kingdom was divided among the surviving sons, again it may be possible a common design was kept for the family with each son having a differing background colour.
Posted by Timurilank at 00:07