Game 1
Returning from another successful campaign against the Ammu Bedouin the Egyptian army found its path blocked by the Amorites. An eventual confrontation with the Amorites had been expected, but not so early in the campaign season.

The Amorite deployed in three ‘divisions’, one securing the approach along the beach, a second further inland on the outskirts of marsh land and the remainder of the army formed a battle line between the two divisions.

The Egyptians nomarch positioned his main body in centre with skirmishers deployed to both wings and in reserve were the conscript infantry. 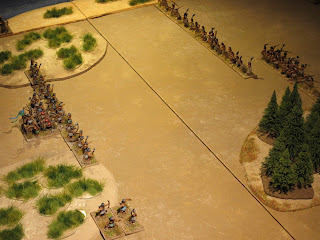 The Amorite moved its wing ‘divisions’ ahead of the main body as it moved slowly forward. Amorite auxiliaries moved forward in support of each wing. Egyptian skirmishers moved to counter the enemy on the flanks. 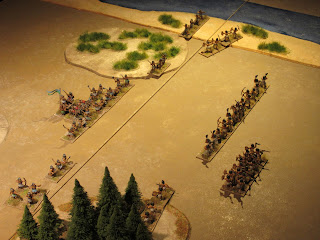 Altering his plan, the nomarch moved the conscripts forward while giving them supporting archery fire. The conflict now escalated as the left wing required the aid of the menfat to support the skirmishers. 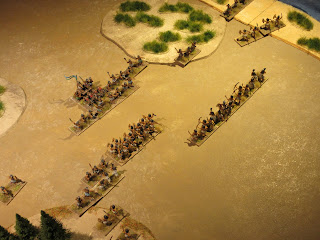 Both lines were now wholly engaged in battle and within minutes the formations dissolved into smaller battles with casualties falling heavily on both sides (2 – 2). 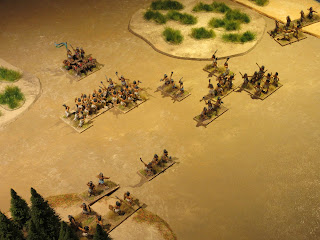 It was not long before the situation became desperate as the Egyptian right collapsed leaving the nomarch no further choice but to call a general retreat. Score 4 – 3 for the Later Amorite. 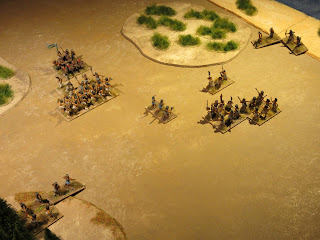 Game 2
Making use of a night march, the Egyptian army slipped past the Amorite to march further south. Re-equipping the army from the supply ships that shadowed the column, the nomarch decided to utilize a number of transports to assault the Amorite from the sea.

Anticipating a seaborne assault, the Amorite shortened their line facing the Egyptians and placed auxiliaries to patrol the shoreline and a unit of warriors were held further back as a reserve. 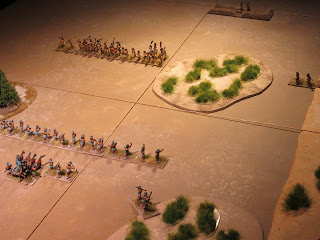 The main Egyptian force advanced slowly forward giving the archers plenty of time to find their targets as the seaborne column disembarked from their boats, these were the menfat joined by a unit of skirmishers. More skirmishers had slipped past the marshland to support the seaborne effort. 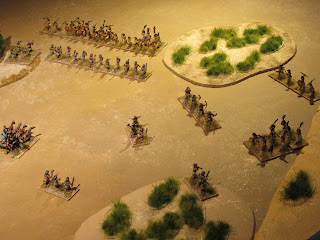 The Egyptian left wing had quickly taken care of the Amorite skirmishers forcing their general to commit his reserve. Both lines were heavily engaged but the situation for the nomarch became desperate as his line of archers crumbled under the blows of Amorite axes (3 – 2, Amorite). 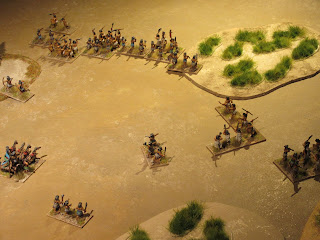 With the line of archers gone, the nomarch found himself surrounded and died. Despite inflicting further casualties among the Amorite, the Egyptians lost heart with the loss of their leader and fled the battlefield. Score 5g – 3 for the Later Amorite. 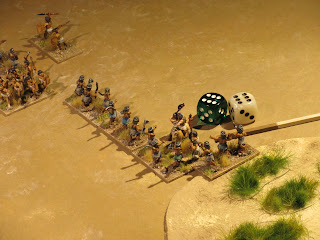 Game 3
The final blow to the Egyptian army came when they found the Amorite blocking their retreat back to Egypt. The Egyptians deployed closer to the shoreline with the conscript infantry positioned forward of the line leaving the newly elected commander to deploy the remainder of the army further back allowing the archers additional room to use their bows. 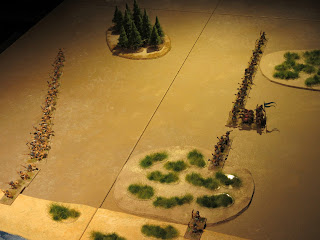 The Amorite did not take the bait and focused first on stripping the Egyptians of its ‘wings’. For this task he sent the skirmishers supported by auxiliaries to open the battle. The main body moved slowly forward. 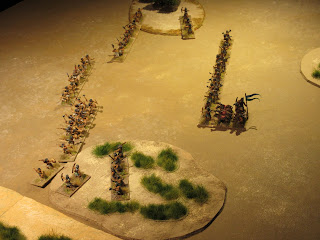 The Amorite plan worked well as the casualties on the Egyptian flanks mounted with no loses for the Amorite (3 – 0). 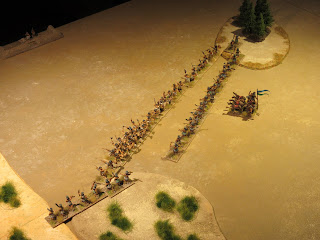 Egyptian archers kept the Amorite tribesmen at bay but elsewhere the situation became desperate as the army was now encircle on both flanks (3 – 1). 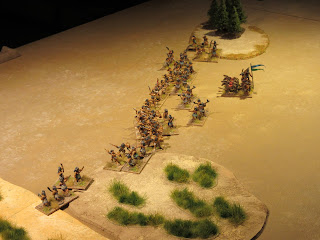 The slaughter now became general such that the army broke leaving their newly elected general to cover its rear. Score 6 (+horde) – 1 for the Later Amorite. 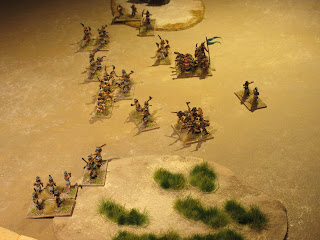 {1} this period of history the Egyptian kingdom is split between a Lower Egypt controlled by the Hyksos and an independent Upper Egypt ruled from Thebes. The unification of the kingdom was known was begun by Kamose during his reign (1555 BC – 1550 BC). Ahmose I (1549 BC – 1524 BC) continued the war against the Hyksos finally expelling them from Lower Egypt. In all likelihood, any conflict with the Later Amorite would place it after this period.
Posted by Timurilank at 00:01