Historical Match up – Later Amorite vs. Ammu Bedouin 1500 BC

Marauding desert tribes have disrupted the caravan trade between Qatna and Tadmor and to remedy the situation a number of Amorite city states cobbled together an army to punish the sand dwellers. All the engagements took place in the fertile region (arable terrain) between the two cities.


The armies
The Later Amorite has a large retinue of troops armed with sickle sword and battle axes (3Bd). These are supported by a good number of skirmishers (Ps) and two units of auxilia, all under the command of a general who rides a platform car (Cv).

In contrast, the Bedouin are lighter armed with auxilia (3Ax) making up the bulk of the army and supporting them are two units of bow (3Bw) and three units of skirmishers (Ps). Both armies have no difficulty in negotiating difficult terrain, but fighting such terrain is not favourable for the Amorite retinue.

Game 1
The Amorite formed a battle line with the auxilia making use of a village to secure their left with the majority of infantry extending a broad front from that point. Skirmishers posted to the extreme right completed the battle formation. Half of the Bedouin could be seen facing the Amorite centre while the remainder were lurking behind the woods. 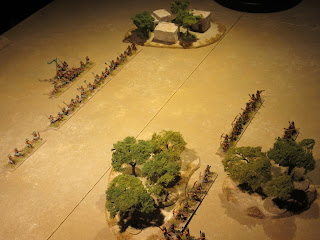 The Amorite general noted the hesitancy among the Bedouin leaders and so moved his own force quickly forward. Within minutes, the distance between the two lines closed the clash that followed gave the Amorite first blood. 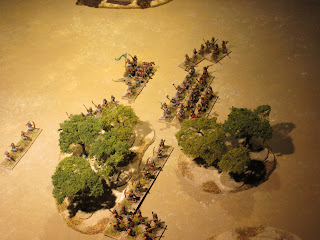 The Amorite were surprised at the lack of resistance from the Bedouin as victory was quickly achieved. Despite the few casualties incurred. the score was 4 – 2 for the Later Amorite. 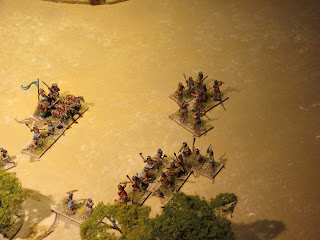 Note: Call it treachery or the sand dwellers were in disfavour by the gods, but three turns with consecutive low pip scores essentially immobilised the Bedouin. Historians will most likely lay the blame to tribal discord.

Game 2
Driving the Bedouin out of the fertile valleys, the sand dwellers were caught near the foothills. Deployed in the valley floor was the main strength of the Amorite force with the remainder securing the heights on the right directly facing the Bedouin tribesmen. The tribesmen were this time less lethargic and were now focusing their main assault on the heights held by Amorite skirmishers and auxilia. These quickly formed a line along the crest as the Bedouin approached. 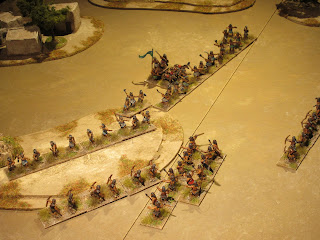 Atop their hill position, the Amorite held long enough to allow the main body time to engage the Bedouin right formed on the valley floor. Inspired by the presence of their leader, the Amorite retinue quickly cut down Bedouin archers and javelinmen bring the score to 3 – 1. 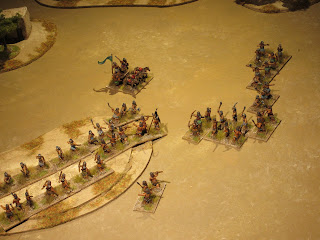 The Amorite suffered another casualty but seeing the entire right wing collapse, the Bedouin called for a retreat. Score 4 – 2 for the Later Amorite. 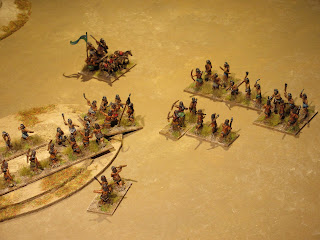 Game 3
A third victory against the Bedouin would ensure peace for a few years so the Amorite were quite optimistic about a final engagement. Both armies formed their battle line, each resting their flanks on covering terrain; here the Amorite made use of a small village and the slope of a nearby hill. Directly to their front, the Bedouin formed their line between two woods. 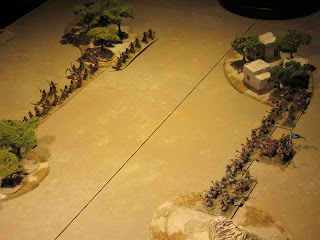 The Bedouin quickly moved their left against the Amorite right positioned in the village while the remainder of the army held their place. 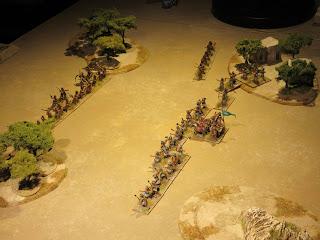 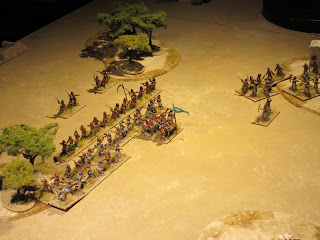 In the centre, the Amorite infantry were meeting stiff resistance incurring a casualty. Despite the loss the battle line still held. 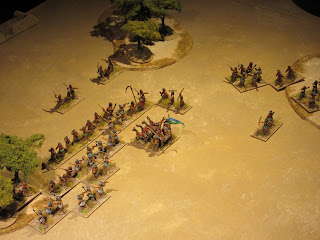 Any confidence that had been felt before was shattered as isolated Amorite units were disappearing under swarms of tribesmen surrounding them. The situation took an unexpected turn as the entire right wing collapsed giving the victorious Bedouin an open gateway to the Amorite camp. To save the army a general retreat was called for. Score 4 – 3 for the Ammu Bedouin. 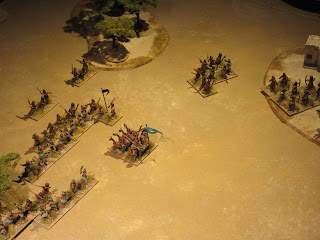 Note: Both Early Bedouin and Early Libyan have scored a victory proving the ‘impossible is possible’.
Posted by Timurilank at 00:27