Later Imperial Roman vs. the Burgundi

This test series begins with Rome invading the forest region between the Thine and the Danube, home to the Burgundi. Two woods are compulsory for the forest dwellers and as optional features the river and an extra wood were selected.

The wood will impede communication between commander and troops, this is primarily so for the Later Roman as the Burgundi fight in dense columnar formation. As the frontage for both armies may remain narrow, players will need more time to reach a decisive point.

Game 1
Rome, as the attacker caught the Burgundi with their backs to a river and the sole wood offered meagre protection for their right flank. Rome’s slow egress from the wooded areas would not dampen their battle lust by much. 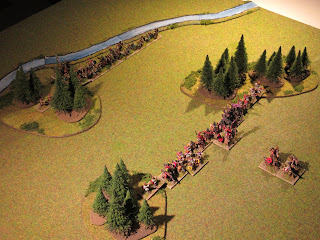 Despite the half hour (two bounds) required to exit the wooded area, Rome was able to deploy a bold line of troops to meet the Burgundi. The Burgundi demonstrating less patience to view the martial progress threw their left wing against the auxilia leaving the wood. 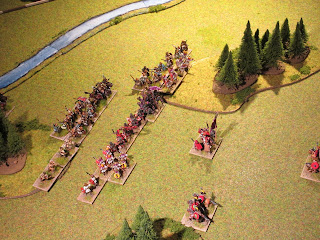 Destroying a unit of auxilia, the Burgundi left pushed back the second unit deeper into the woods. Wary of a possible flank attack, the Roman commander signalled a general attack. 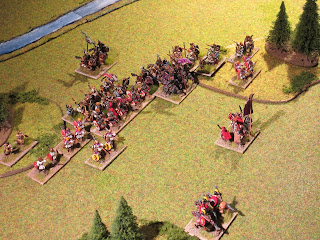 In quick succession, both halves of the legion were destroyed while Burgundian losses were small by comparison. With the arrival of the light horse (Illyriani and Mauri), the situation looked less desperate. 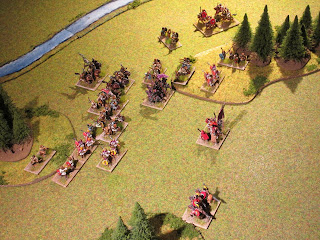 The Roman left flank had fought well inflicting a number of casualties, but seeing the light horse repulsed and the Burgundi clearing the wood on the right, the Roman commander signalled a general retreat. Score 4 – 3 for the Burgundi. 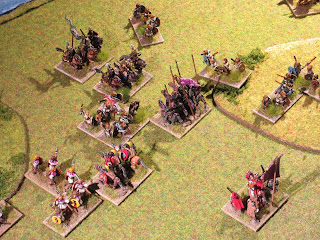 Game 2
The Burgundi, now the attacker, opted to have the two woods and river in their deployment area, thus denying the Romans a defensive position. This left the Romans with one wood and therefore deployed their line further back from the Burgundi battle line. 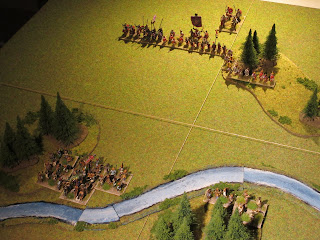 The river proved less a problem for the Burgundi than was expected (class II) as the troops positioned on the right kept pace with the main battle line. 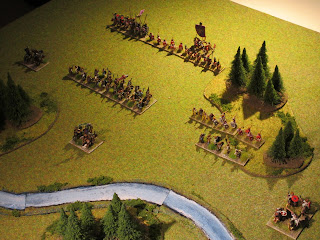 The Roman left wing easily repulsed the Burgundi effort to take the wood and this prompted the main Roman battle line to move forward to meet the barbarian. The Roman commander’s confidence was raised upon seeing the column of light horse close in on the Burgundi rear. 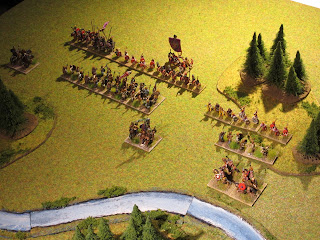 To counter the threat, the Burgundi chieftain launched the majority of the warband against the Roman legions and seeing the auxilia content to not leave the wood, called on a unit of skirmishers to assist repelling the Roman light horse. 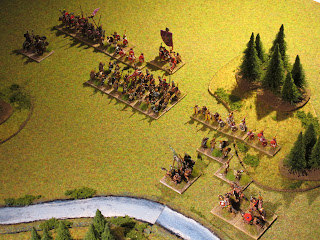 The destruction of the light horse was celebrated by the chieftain and his guard, but looking back at his centre; the Roman legion had survived the warband onslaught and broke through. Further downfield, the clibanarii draco standard could be seen above the heads of his warriors and with a heavy heart signalled a general retreat. Score 4 – 3 for the LIR. 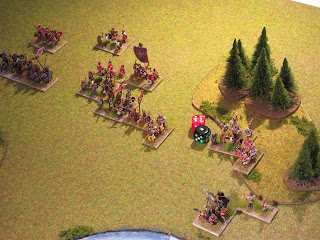 Game 3
Rome, now the attacker, secured two woods for their deployment area leaving the Burgundi with a river at their back. 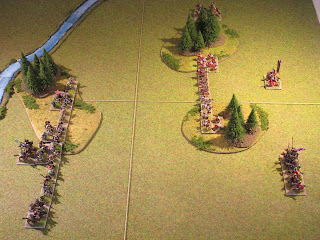 Upon leaving the wood, the Roman battle line left wheeled and moved forward, leaving the cavalry on the far right to bide their time and wait for their signal. 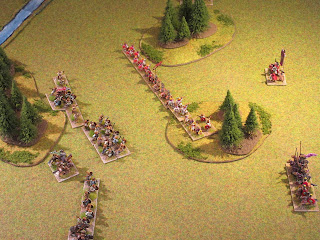 The engagement now became general as combat was taking place up and down the line. To redeem their poor performance in the previous battle, the light horse swept around the wood to enter unopposed, the rear of the Burgundi line. 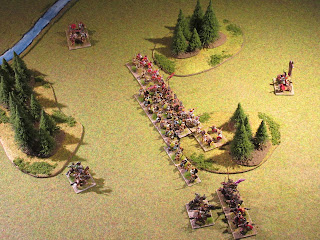 The light horse proved their worth by assisting in the destruction of the Burgundi skirmishers. Nonetheless, the situation became serious for Rome as all their legionnaires fell before the warband fury. 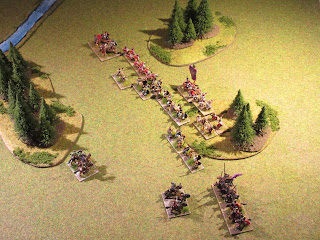 The Burgundi had suffered (three elements) heavily, but the Roman commander looking at his centre now filled by an oncoming wave of savage barbarians, called a general retreat. Score 5 – 3 for the Burgundi. 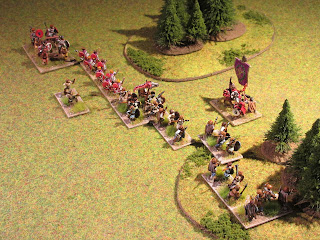 Commentary
Of all the test games to date, these were the toughest games. The terrain required extra time to negotiate, so many bounds were filled with manoeuvre and no combat. The casualties on both sides were frequently even, sometimes last several bounds.

Despite the large game board, 80 cm x 80 cm, the battles were confined to relatively small areas which were due to the river and three woods. The risk of having troops outside command distance did influence how the game developed.