The Skellige Islands are located off the western shores of Temeria and the Nilfgaard Empire. The six major islands are inhabited by Nordic-like clans each ruled by an elected monarch or Jarl.

Seafaring and raiding are their principle pastimes and they were keen to fight on board their long ships or on land as foot soldiers primarily armed with axe and a minority with bow. The islands are mountainous and are not ideal horse-breeding areas and as their number would be limited to agrarian requirements, there are no mounted units. Their army composition would not be dissimilar to Leidang Vikings.

Each island is home to a clan and  at the Witcher Wikia you can read background information for each clan as well as their colour preferences which make them distinct from other clans.

The Skellige Islands becomes the final battleground in the third game, the Witcher - Wild Hunt. 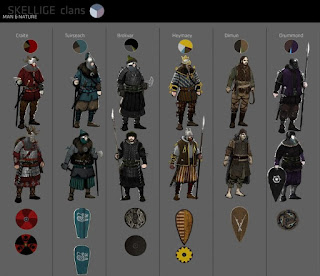 
Update (09-10-2017)
The seafaring clans of Skellige raided both sides during the four wars covered by this project; the Southern Conquest and the 1st, 2nd, and 3rd Northern Wars. These raids are mentioned in passing conversations in the books but no detail is given as to which clans were the more enterprising. On a side note, as the empire annexed kingdoms bordering the coast, raiders confronted with frequency the fleets of Nilfgaard protecting their supply and troop convoys.

Plans are under way to adapt the DBA naval variant, De Bellis Navalibus, for use with this project. This may take some time as ships and suitable terrain must be scratch-built.
Posted by Timurilank at 07:38