In 221 BC, Hannibal Barca succeeded his father as commander in chief of the army at the young age of 26. Spending the next few campaign seasons consolidating the territory of Hispania he returned home from one expedition laden with spoils and was confronted by a massive coalition of Carpetani, Olcadians and Vaccæans near the River Tagus. One source gives their strength as 100,000, an exaggeration, but whatever size he did not want to meed it in the open plain.

Demonstrating tactical skill, Hannibal crossed the Tagus during the night and expecting the Iberians to pursue, Hannibal deployed his troops away from the river bank to allow the enemy sufficient room to cross. The following morning, the Carpetani discovering that the Carthaginians had crossed during the night, moved in pursuit by crossing the river at a number of points.

Perfectly timed, the Carthaginians caught the Iberians while crossing and broke their army. Hannibal crossed the Tagus a second time to pursue the remnants forcing their kings into submission.

Seeking a Balance
The sole purpose of refighting this battle was to experiment with river crossing and could such a game, despite its outcome, achieve a balance enjoyable for both sides. There are a number of problems that need resolving, such as the size of the Iberian army, the actual crossing of the Tagus, and the relative position of the Carthaginian force.

Size
Having completed the Battle of Toletum, I kept the Iberian troops to represent the Carpetani coalition and swapped two Roman commands for Carthaginian ones. If one wishes to increase the number of Iberian commands I have some thoughts in the next post as to how best to adjust the game for play balance.

The Crossing
Next problem was how best to represent the crossing of the Tagus river. The accounts of the pursuit describe the depth as chest height for infantry but troops would have to contend with a strong current. Allowing each tribe to form two columns would help speed crossing, but good pip scores would be required to deploy from column to a fighting formation on the left bank. Visualising the crossing by a horde of troops, one could imagine this would nearly have its own momentum – similar to a pursuit move. Therefore, to maintain a good game tempo each column could move 1BW while crossing regardless of the pip score cast. This would help keep a constant flow of movement so Iberian commanders can utilise their pip score on reaching the far bank to scamper into battle formation.

Deployment
From the photo you will see the start positions of the Iberian columns and the Carthaginians deployed for battle. Both armies deploy no closer than 6BW from the centre line, in place of the usual 3BW. The extra distance should allow the Iberians time to position at least half their force on the left bank before the Carthaginians have reached the half way mark; that is the theory. 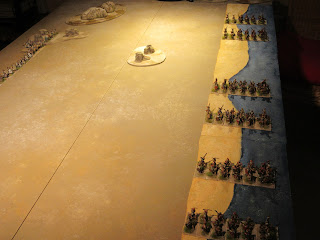 The Battlefield
I searched the internet for photos of the Tagus River and the countryside presented nothing new that had already been seen for the previous Battle of Toletum. For this test game, I omitted the BUA and kept one difficult hill with a few scrub or rocky ground and one long waterway. Carthage, as defender would position the three pieces.

Tomorrow – fighting the battle.
Posted by Timurilank at 00:40