Battle of Toletum, 193 BC. (Ulterior Hispania)

“Caius Flaminius took Ilucia of the Oretanians, while Marcus Fulvius fought a pitched battle and gained victory against the Vaccæans, Vectonians, and Celtiberians near the town of Toletum.
– Livy, Book XXXV, VII.”

After completion of the Consular Army (Polybian), I began a series of historical matches between it and a host of enemies of the post-Punic War period. Although these were the standard 12 element size armies I did make a list of larger battles that I would to do as these presented a number of challenging situations. Toletum was one such battle. Both Livy and Appian cover the War in Spain, but the latter omits any mention of Toletum. Appian does write about other conflicts involving the Celtiberians,  so we can draw some useful insight from those brief references.

The Armies
In 193 BC, Marcus Fulvius (Nobilior) served as praetor in Hispania rose to fame as consul four years later. According to Livy, 193 BC is a particular busy season as all four commanders (2 consuls, 2 praetors) were on campaign in various parts of Hispania. In practice, this would give each commander a legion and an equal number of auxiliaries under their command or approximately 10 – 12,000 men. Using the historical ratio in the rule book, we can calculate the number of elements required for the battle.

Opposing Rome is a confederation of Vaccæans, Vectonians, and Celtiberians led by King Hilernus. Whether the Vectonians are Hispano-Celtic or Celtiberian is up to debate, but the Vaccæans are related to the Celtiberians. Regarding the strength of their force, Appian does mention the Celtiberians raising 20 – 40,000 warriors for later campaigns. Even with a lower figure of 20,000 the Celtiberians will still outnumbering the Roman column by half.

The Battlefield
Livy mentions Toletum as being fortified and served as the nominal capital of the Carpetani, therefore a likely objective to be taken by Fulvius for the upcoming campaign. Using a number of online map utilities, we have a general idea of the topography within a day's march of Toletum. Resting on the River Taag (Tagus); the countryside near the city is relatively flat marked undulating hills with a few rising to a significant height not unlike the Arapiles of Salamanca fame (1812); in DBA terms this would be arable terrain. Tomorrow, the re-fight will be posted.

Of interest
Prior to the start of the 2nd Punic War (219 BC), Hannibal fought in the same region against a similar confederation (Vaccaei, Olcades and Carpetani) before marching on Saguntum. So I may be dusting off the elephants and Numidian cavalry following this battle. 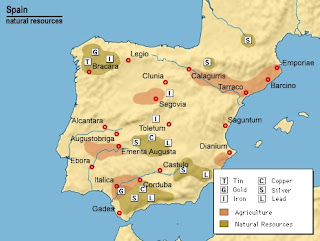