Following the fall of the Abbasid Caliphate, the Muslim held areas of the former Persian Empire came under control of the Buyids, an Iranian Shia dynasty of Dailami origin. This large expanse of territory comprised of the emirates of Baghdad, Ray and Shiraz. There are three sub-lists for the Buyid armies and for this project I have focused on the Baghdad Buyid option which have a good balance of mounted and foot troops. To complete the sub-list, these are the only ones to have the Dynastic Kurdish as allies (III/61).

The fighting takes place in the northern regions of the Abbasid Caliphate which are classified in DBA terms as ‘arable’.

Game 1
The Buyid found the Abbasid holding a small village and wood relinquishing possession of the sole hill. The Abbasid formed two ranks defining their intent to fight on the open plain between features. The Buyid placed the Dailami troops on the slopes of the hill with the remainder positioned on the plain below. The locals (5Hd) formed to the Dailami left and cavalry were placed to support the battle line. 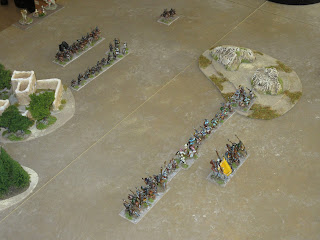 Both sides eventually wheeled their lines and closed the distance between them. The Abbasid probed the Dailami held hill while on the right archers moved to the edge of the village to bring their bows to target the Buyid archers. 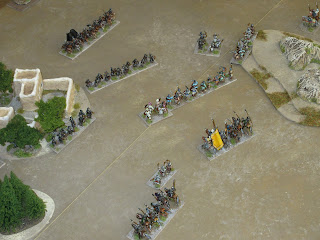 The initial clash had not lasted long before the Dailami auxiliaries crumbled before the relentless steady wall of Abbasid spear. The locals were first to flee creating a crucial gap in the line. With casualties quickly mounting, the Buyid general called for a retreat. Score 4 – 2 for the Abbasid. 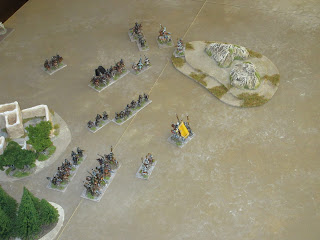 Game 2
For this battle, the Buyid called on their Kurdish allies who are seen positioned in the centre. The Abbasid controlled favourable ground and deployed between the village and difficult hill. 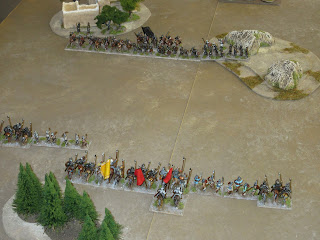 The Abbasid, taking advantage of the slow approach of the centre units, launched their own attack by the cavalry on the right. These gambled on catching the Buyid archers by surprise. On the left, the Abbasid were awaiting the approach of the Dailami infantry. 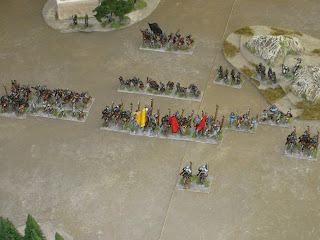 Within a short period, the lines of both sides lost their semblance of formations and broke up into small isolated battles. By this time, the casualties were mounting quickly and with Buyid resistance on the right collapsing, their general called a retreat. Little did he know how close to victory he was, score 4 – 3 for the Abbasid. 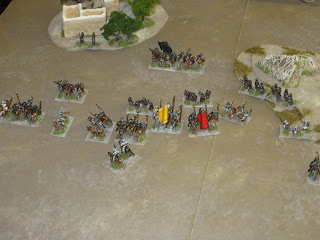 Game 3
For the final battle, the Abbasid formed a line anchored on the right by a village with the open flank covered by the majority of cavalry. Facing them, the Buyid placed their archers in centre with their flanks covered by Kurdish and Buyid cavalry. On the left, the Dailami secured the hill position while Buyid and Kurdish light horse covered the right flank. 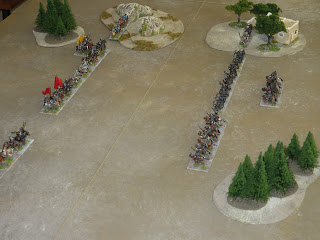 The slow pace of the Abbasid line gave the Buyid an opportunity to roll up the Abbasid left flank. The Kurds were given the task and were supported by Buyid cavalry and all the light horse. Buyid archers sent supporting spearmen recoiling leaving a few Abbasid cavalry exposed. 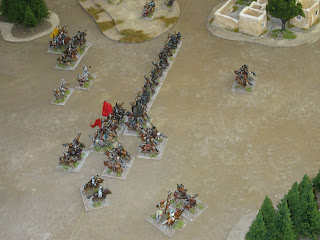 Abbasid casualties quickly soared as they were outnumbered and outclassed by the Kurds. The Abbasid general was forced to counter moving himself and his guard into the battle. The loss of their general, the Abbasid turned about and fled. Score 5g – 1 for the Baghdad Buyid. 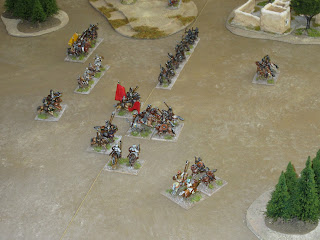