While compiling events and dates to write a timeline for this project, I noted the early Umayyad invasion of the Indian sub continent. These and other campaigns are covered in the Wikipedia under Caliphate Campaigns in India. In broad strokes, the early campaign reached the Sindh and after a period of time struggled against a number of Hindu counter thrusts.

As a prospective addition to the project's list of armies, the Arab Indian basically mirrored the Umayyad and Abbasid lists but for one unique feature, the Arab Indian could have ‘tropical’ as its home terrain. My current tropical terrain are dated, so these will require some refurbishing and new items will be added. When completed, I will post a short tutorial with photos to my second blog as the project is completed.

Miniatures
The complete Arab Indian army was culled from an existing collection of later period Indian which totalled nearly 60 elements, so a dozen or so elements would not be sorely missed. The majority of the infantry are Essex with some Old Glory thrown in, but as the bases were thin, these were redone to become standard with the rest of the collection.

The cavalry are exclusively Essex, but these have the problem of static poses and horse tails that protrude beyond the base; the latter were shortened and all spears were freed so as to create a variety of poses.

Painting
The figures were already painted and as the colour selection was already Indian in appearance, these were kept essential as is. These should contrast nicely with the bland Umayyad 'white'. The general’s banner, which will be made later, will have a similar shape as the Abbasid model, but have a pale blue ground colour in place of black. 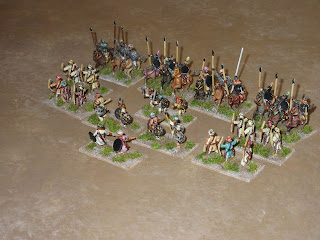 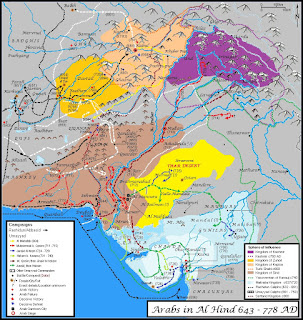