The village of White Orchard is featured predominately in the game three of the Witcher game series and although not mentioned in the novels, it is illustrated in the comic book series. My interest in the location was to model this for the project and so added it to my 'to do' list. That was one and a half years ago.

As misfortune (delayed delivery of miniatures) opened an opportunity for good fortune, I decided to start construction of the village. 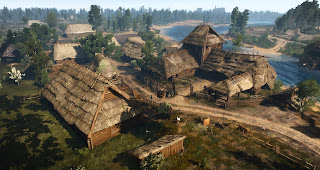 Each structure has a foam core which is cut and shaped to size. For DBA use (BUA, hamlet), the number of structures was kept to three houses and the tavern. With the blocks roughly shaped, I used Milliput to cover first the walls and after curing added the thatched roofs. 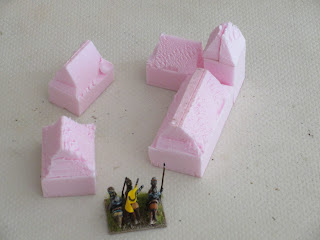 Beginning with the walls, these were first given doors and windows, and then scored to simulate logs. The following day, the corners pieces were then added and the thatched roofs a day or two later. I made sure there was enough Milliput to create sufficient thatching hanging over the walls.

The tavern is constructed in four sections; a tower, two wings and a covered area for the patron’s horses. The latter section is held in place with brass wire to form upright posts; later, fencing would be added which was made from card stock (120 gram). 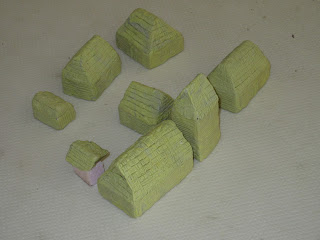 Bases are triplex basswood, cut and sanded. The structures are now glued into place as this will make handling easier as you begin painting and dry-brushing. Brass wire posts and fencing are set in place.The base is covered with a mix of white glue and sand. This is later painted and dry-brushed with ‘greenery’ added as the final touch. 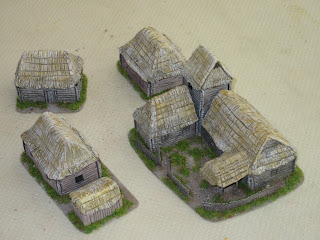 In the Witcher 3, the Wild Hunt, there is a Nilfgaard garrison deployed at White Orchard, so the presence of a camp and a few watch posts placed at river crossing points would not be out of place. The region is known for its fruit bearing orchards and ample pasture for sheep and cattle, but as the war progressed and left its mark on the land it attracted its share of monsters.
Posted by Timurilank at 01:40