The Witcher Project - the Kingdom of Ebbing

Ebbing is one of the four large realms to the north of Nilfgaard and is the first to become annexed after the period known as the Southern Conquest.

At the Witcher Wikia, is an artist's concept of the Ebbing armorial based on descriptions in the book. The blue lines on a white background presumably signify the four major rivers that course through the province. Ebbing banners would later be replaced with the Nilfgaard blazon sharing half of the field.

Aside from the banners, the blue tunics are the only means by which Ebbing troops are to be recognised apart from Nilfgaard.

The maps found at Witcher Wikia show Ebbing with one major city and two towns. They are Claremont, Fano, and Tegamo  which will be featured on the campaign map. Further, Clermont seems to be only one featured with stout walls and a citadel. The other two, Fano and Tegamo, are classed as towns so may have defences not quite up to standard.

The Witcher Wikia mentions very little of castles or noble houses therefore the army reflects a reduced number of knights and men at arms with foot troops, presumably the militia and city garrisons predominating.

Troops for the province of Ebbing are done. Next are those of Metinna. 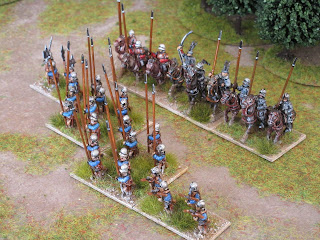