Although the Abbasid lists cover the period from 747 AD to 945 AD, we do find references to Abbasid enclaves surviving a century or two later. At the apex of its conquests the Abbasid empire exceeded that of Rome, however, governing such a large realm was not its strongest suite as frequent civil wars and rebellions fragmented the empire creating new dynasties.


During this period, the Abbasid resumed its war with the Byzantine not only on land but also at sea. Of peculiar interest is the fact that the Abbasid became allied with the Tang Chinese sending troops to help bring down the An-Shi Rebellion in 756 AD. Reading its list of enemies these cover nearly every part of the empire which offers a multitude of campaign and scenario possibilities.

The miniatures
Like the Christian Nubian of my last post these are also Old Glory miniatures and are a mix of Arab Conquest, Andalusian and Crusade types. The infantry packs are half sword, half spearmen which neatly produce the necessary number of blade and spear elements. Many of the weapons were ‘freed’ from their contact with head or torso and bending the arms produced an active looking group.

Painting
Using a matt white undercoat I could use thin coats of paint for clothing and shield colour. This helped speed the process of painting the army as the figures did not require any highlighting. I decided not to paint these as the elite types dressed in black, but did use a darker palette of brown and green and mixing red or orange to produce a greater range of colour. Turbans are either white or black and these contrast nicely with  as their topcoats or tunics to increase the variety of colour.

Shields are for the most part painted leather colour and while still ‘wet’ I dappled the outer edge and ‘boss’ to add variation. From my research, the ‘tiraz’ is associated with the conquest period, so they were not painted on the upper arms of the figure.

Banners
All flags are black which is standard for the Abbasid and depending on which troops are carrying them they may vary in shape. Six elements have them. which quickly identifies the army as Abbasid. There are no inscriptions on them as these seems to be a later development.

The Abbasid in battle array. 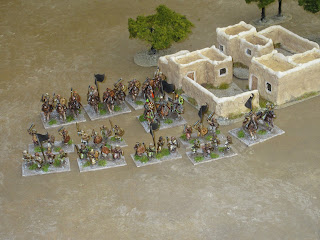