The Aghlabid dynasty ruled Ifriqiya (Northern Africa) on behalf of the Abbasid Caliph. Aside from paying a yearly tribute, the Aghlabid did have autonomous rule undertaking the conquest of Sicily and other islands of the Mediterranean Sea and countries from Spain to Greece. This brought them quickly into conflict with two formidable powers of the time; the Holy Roman Empire and the Byzantines.


The composition of troops reflects a relatively fast striking force comprising a large percentage of mounted troops supported by spear and bow types. Like the Vikings, the Early Muslim North African can make use of seaborne assaults.

The miniatures
Of the eight packs ordered, the Early Muslim North African are the third army to be built. Old Glory Arab infantry packs have an equal number of spear and sword which is useful for producing the 4Bd and Sp elements necessary for most of these Middle Eastern armies.  Likewise, the skirmisher pack have an equal number of bow and javelin armed figures. To generate variety of poses many of the weapons were ‘freed’ from their placement against the head or torso of many figures; bending the arms further produced an active looking group.

Painting
To differ these from the Abbasid, I painted all the figures with white turbans but gave them a mix of white, red brown and ochre colour topcoats. Shields were painted a variety of leather tones and lightened or darkened to show wear and tear. By way of an experiment, I painted grey those parts that would later become white turbans or topcoats. After black lining the figures, these would only require small wedges or lines of white giving a sense of depth (folds) to the clothing.

Command stand
‘Armies of the Dark Ages 600 - 1066’ by Ian Heath mention Arab flag colour being black for the Abbasid, red for the Khawarij, and green for the Spanish Umayyad, Alids and Fatimid. Green, white and black were also recorded for the conquest period. No mention of the Aghlabid but it would seem logical that green standards were also present. 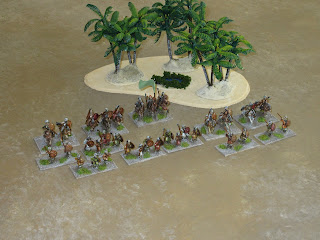